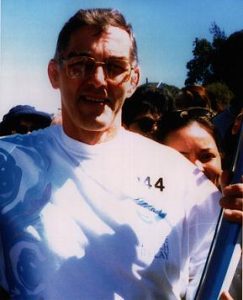 Sensei Barry Johnson would have to be one of Australia’s all time Judo Champions and one of our greatest ambassadors for the Olympic sport of Judo. He has the most impressive competition record of any Australian Judo Champion.

Off the mat Barry is a very likeable, polite, gentleman and good family man, far from the fearsome, fit, focused, strong competitor of past years. Sensei Johnson’s reign as an Australian Champion spanned thirteen years of his thirty nine years in the sport. He began his Judo training in 1963 under Sensei Brian Burke and Sensei Terry McCathy at the City of Sydney Police Citizens Boys Club, Woolloomooloo, New South Wales. He has also been a member of YMCA Sydney Judo club, Sydney University Judo Club, Moss Vale International, and Illawarra International Judo Clubs. Sensei Johnson has held the rank of Yondan (4th Dan Black Belt) since 1978.

Olympic Games record:
His Olympic Games record is as follows: 1972 Munich, West Germany, 20th Olympiad played both U93 and Open division. Selected for 1976 Montreal, Canada, however due to a medical problem detected during the Olympic Team physical did not attend.

Sensei Johnson’s philosophy to his great competition career is summed by him as “it’s not the winning or achievements that count but the journey to get there”.

He was at the Illawarra International Training Camp held over the Australia Day long weekend teaching and helping wherever possible. His experience and personality shows in every aspect of his Judo and all benefit from it, particularly the young up and coming players. The sport of Judo is in good condition when we have senior players and champions like Sensei Johnson and others putting back into the sport at events like this.

Sensei Barry Johnson exemplified everything one would desire in a role model for the young, as a competitor, he was fearless, impossible to dominate, aggressive, tireless, and confident. As a technician and teacher he has given of his time and experience to literally hundreds of judoka, all of whom have benefited from his knowledge and his patience. Unlike many in the Martial Arts, he has not sought to cash in on his success, nor even to seek his due reward by applying for promotion to higher grades. He practices, and teaches, for the sheer love of the game.

Off the mat, Sensei Johnson is regarded by his peers as a friendly, modest and very popular champion. Sometimes our sporting administration does not give proper recognition to it’s great sporting ambassadors and champions of the past and it is with great pleasure that AMAHOF gives such overdue recognition to Sensei Barry Johnson – a true champion and martial artist pioneering Australian Judo nationally and internationally.