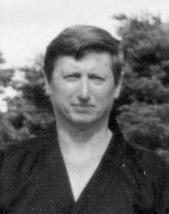 Martial Arts Historian of the Year

Martial Arts Historian of the Year

Pat Zalewski, martial arts practitioner and historian, started karate training in late 1964. He is a former New Zealand Karate representative to the 1975 IAKF World Championships in Los Angeles, and runner up to the New Zealand Kata Championships in 1976. He holds Black Belts in Shotokan, Seikukan and currently holds the rank of 6th Degree in his ‘Yoshikan Karate Association’ as well as 5th Degree in Kobudo, through the Internatonal Weapons Society in which he is currently Chief Instructor.

His early Shotokan Karate training was with Wayne Williamson who founded the Brisbane Karate club. He then studied with Tamio Tsuji, then a 4th dan in Seikukan (and later to become the National Australian coach, (FAKO).

In 1969 he met up with Hiro Tanaka who was then about 47 years old and a Yondan in Shotokan and after an intense training period gained his Shodan from him. Tanaka San was a direct student of both Gichin and Gigo Funakoshi, though his primary teacher trained under Obata.

Upon returning to New Zealand Pat met Grand Master Robert Gemmell who was teaching Kempo at Porirua and who allowed him to train at his dojo while Pat was starting one of his own clubs. In those days it was the practise to use Japanese visitors off the boats to stop by and train. Some of them were very talented karate ka and kobudo instructors and the Japanese consul would contact him when they arrived in port. “I learned a number of kobudo forms that way from Shito Ryu and Shorin Ryu instructors.”

In 1965 Pat started Kobudo with the first Bo Kata, Ginowan no kon, and says, “I kept gathering them and tried to sift through the concept of style with kobudo.I looked at katas from Matayoshi, some of Taira’s and some Yamai forms.” John Sells, one of the best kobudoists in the U.S. “helped me greatly in working though the forms and gave me a lot of encouragement and guidance, especially in establishing the IWS (International Weapons Society) in New Zealand with Robert Gemmell.

In the late 1970’s he started a study on vital points and acupuncture as strike areas and did an article in the now defunct South Pacific Martial Arts magazine. Currently he is Features Editor for the “Insights into Martial Arts” Magazine, an d has contributed many valuable articles on martial arts history and traditions.

Pat states that he never liked tournaments much but came second to Brian Fitzpatrick in a New Zealand one in Lower Hutt when the New Zealand WUKO and ANZKAF organisations merged to have a united New Zealand tournament. He was also on the New Zealand team to the IAKF World Champs in Los Angeles in 1975. At that point he “quit tournament work and went over to judging as we never had enough of them”.

Pat is a Board Member of the N.Z. Sokeship Council.

He was inducted in to the New Zealand Hall Martial Arts of Fame 2000. At the 2002 Awards, Pat will be inducted into the Australasian and World Karate Union Halls of Fame.