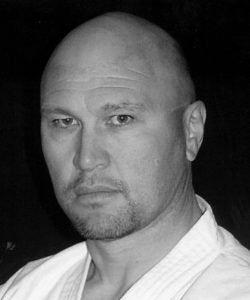 Inducted into the A.M.A.H.O.F.(Inc) for 2002
Kyokushinkai Instructor of the Year

Inducted into the W.K.U.H.O.F. for 2002
Kyokushinkai Instructor of the Year

Grading Record. Number of Gradings as Panel Member : More than 20.

1988 : March – Travelled to Britain for one month’s training with Shihan Steve Arneil and Sensei Cyril Andrews.

1990 : August – Winner of the Australian knockdown champs at Sydney.

November – Member of NZ team to World Champs at Tokyo, Japan. Placed 20th in the world. First ever NZ’er to make it through to the final day.

Retired from the ring and threw all my energies inro running my Huntly dojo.

Celebrated the International Year of the Woman by selecting and sending two female black belts to the Hawaii training camp hosted by Shihan Bobby Lowe.

1995 : Attend World tournament as country representative. Corner judged and performed in a demonstration of kata.

Since my inception as a Branch Chief by the late Mas Oyama, I have endeavoured to adhere to his teachings at all times. I have continued to remain active as an instructor and am still the Chief Referee at all our tournaments.

At the 2002 Awards, Kevin will be inducted into the New Zealand, Australasian and World Karate Union Halls of Fame.