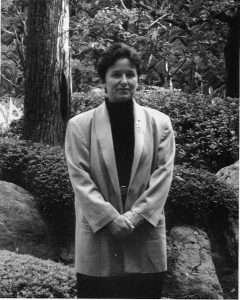 Inducted into the A.M.A.H.O.F.(Inc) for 2002
AIKIDO MARTIAL ARTIST OF THE YEAR

Inducted into the W.K.U.H.O.F. for 2002
AIKIDO MARTIAL ARTIST OF THE YEAR

Sensei Katie Noad was born in Melbourne in March 1957 and moved to Perth with her family in 1963. Attended Applecross Primary and Senior High Schools. She was involved in netball, tennis and chess at primary school, hockey and softball at high school. Also tried ju-jitsu for a very short time at the local YMCA. She cannot remember much about the ju-jitsu apart from not knowing how to fall well and being the only girl in the group. In 1976 Sensei Noad returned to Melbourne to study photography.

After commencing aikido in 1980, one job she had was working with children and youth in St Kilda, an area with its fair share of social problems. The children knew she did aikido and one day she pulled aside a frustrated 15-year old who was bullying one of the younger children. He was a well built boy who played rugby. He confronted her with a brick in hand. Sensei Noad had not learnt any techniques against bricks at that early stage in her aikido practise!

Because of her position of authority as a supervisor of the after-school adventure playground she could not back down no matter how scared she was so she kept her distance, trying to avoid getting hurt and tried to give the boy an out without losing face in front of the other children. In the end he threw the brick at an inanimate object (not her) and stomped off. No-one was hurt and no-one lost face.

In 1985, after approximately 9 years living in Melbourne, doing various jobs and having been hooked on aikido for 5 years, Sensei Noad headed to Japan for a year to train. The one year became four and she returned to Australia with her partner Noriko Shimada and established a dojo in Perth in 1989.

In 1986/87 she became a member of Sugino Dojo in Kawasaki to practise the classical martial style of Tenshin Shoden Katori Shinto Ryu under Yoshio Sugino Sensei (classified by the Japanese government as a National Living Treasure) and Hatakeyama Sensei.

Before returning to Australia in 1989, she trained with and coached Japanese women at the Tokyo YMCA Aikido Club. She returned to Australia in 1989 and established Keishinkan dojo in Perth., teaching aikido and Katori Shinto Ryu. Sensei Noad instigated the establishment, and became a founding member, of the Network for Women in Martial Arts (WinMA) WA. A group established in 1990 to support and promote women’s participation in martial arts and self defence training.

Between 1990 and 1997 as well as instructing Aikido, Sensei Noad also taught Women’s Self Defence courses and gave seminars on women’s self defence for various community groups. Some of her other achievements since have been:

New connections have also been made with an Osaka based Kyudo (Japanese archery) Organisation and a Hokkaido based Daito ryu Aiki jujutsu Organisation.