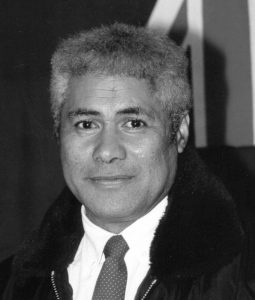 Inducted into the W.K.U.H.O.F. for 2002
Gung Fu Instructor of the Year

Kati Unuia started martial arts in 1963 in his native home of Rarotonga at the age of ten. He joined a gym run by Tom Masters where he learned boxing and self defence because he was sick of being knocked around by bullies.

In New Zealand his training commenced at the Hastings Y.M.C.A. doing Kyokushinkai, Tien Shan Pai, Hapkido and Shotokan and he has also practised Judo in Fiji. He attained Shihfu Grading in Tien Shan Pai (Celestial Mountain School) in 1976 and Shodan Grading in Kyokushinkai Karate in 1978 and was on the competitive scene till he retired in the late 1980’s. During the early days and after the death of his teacher Master Chen, Kati continued and competed in the Martial Art competitions as one of the few Chinese exponents with the well established styles.

In 1991 he took the New Zealand Tien Shan Pai team to the Kubota World Cup in Australia where his students gained creditable placings. Fourteen year old Steven Elliott became a World Champion in Kumite and his twelve year old sister was placed third in the Forms section, with Andrea Sciascia and Chris Johnson who also won four top placings.

Kati Unuia is the head of the New Zealand Chinese Tien Shan Pai Martial Arts and Multi Style Association and holds the title of Shih Gung. He relates that Tien Shan Pai was established by the late Master David Chen who had immigrated from Taiwan. After his death the style continued on a small scale with Kati and a few others who carried on the system and worked to keep the name alive. He says in those days the training consisted of Shotokan and Tien Shan Pai, with more influence on Japanese terminology and stances. “I was not happy with everything at the time because we were doing Chinese Arts but using Japanese terminology, so I began doing more research to build a complete picture of everything within the system back to its original place.”

In 1994 Kati Unuia was invited and attended the World Taiji Quan conference in Beijing, China. He says that it was an honour to be the only invitee from New Zealand to attend the home of many of the Chinese Martial Arts systems. Kati was inducted into the Inaugural New Zealand Hall of Fame in 1997 and has been appointed N.Z. Chairman for the International Martial Arts Games Committee. He has also been appointed to the Board of the N.Z. Sokeship Council.

At the 2002 Awards Kati will be inducted into the Australasian and World Karate Union Halls of Fame.