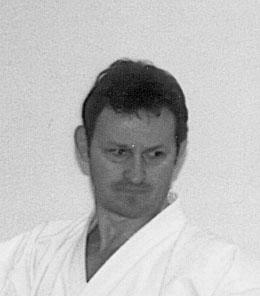 Inducted into the A.M.A.H.O.F.(Inc) for 2002
Okinawan Goju Ryu Instructor of the Year

Inducted into the W.K.U.H.O.F. for 2002
Okinawan Goju Ryu Instructor of the Year

Shihan Dennis May is the Chief Instructor for the New Zealand Okinawan Goju Ryu Karate Association (NZOGKA). He is responsible for the technical standards of Goju Ryu Karate and regularly travels throughout New Zealand, Australasia and the rest of the world conducting training seminars and gradings. Each year he travels to Okinawa for training with the Okinawan Masters. His major achievement was in 1978, a Silver Medal in the All Style Tokyo Championships. He later captained the NZ team to Japan where he won a Bronze Medal. He has been three times New Zealand Champion and has held numerous Australasian titles.

Dennis May retired from competition in 1989 to concentrate on his responsibilities as Chief Instructor and over recent years has become a popular Instructor in many countries including America, Russia, South Africa and Australia. In 1979 Shihan May became one of the few Karate-Ka in the world to succcessfully accomplish the 100 man Kumite, free fighting 100 opponents one after the other. In 1999 he travelled to Okinawa and graded 8th degree black belt. Sensei Dennis May is the only 8th degree black belt in the Australasian region, (in his system).

Dennis is a Board Member of the New Zealand Sokeship Council. At the 2002 Awards Event he will be inducted into the New Zealand, Australasian, and World Karate Union Hall of Fame.