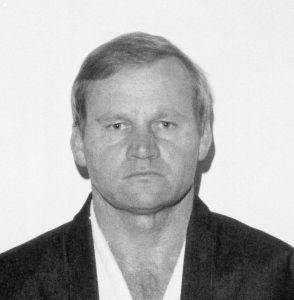 Samurai Arts Instructor of the Year

Just returned from Seminars in Melbourne and Sydney with Obata Sensei.

Grading Record. Number of Gradings as a Panel Member : More than 20.

After studying Judo as a child, Sensei Dave Butler commenced training in Goshin Ju-Jutsu in 1969 at the age of 15 at the Pukekohe Jiu-Jitsu Club under tutelage of Sensei Ivan Gale. While undergoing a thorough grounding in Jiu-Jitsu, training was supplemented with Karate and Aikido. A shodan black-belt grading was received 7 years later with the New Zealand Jiu-Jitsu Association. At the time he was the youngest black-belt graded in New Zealand.

Dave moved to Australia for a year in 1978 where he continued study with the Australian Society of Ju-Jitsuans and the Judo Federation of Australia, training on a daily basis.

On return to New Zealand he started the Bushido Ju-Jutsu Kai in Mt Albert, Auckland (the name later changed to “Samurai-Arts”). While teaching Ju-Jutsu several times a week, Dave and one of his senior students, continued his supplementary studies of Aikido. In addition Dave spent 2 years training in Gung-Fu under Tom Grbich in Glenfield.

Overseas experience and cross training led Dave to pursue advanced tuition in the international arena. A world trip in 1984 to Japan, Europe and North America enabled contacts to be made that would provide the foundation for later years. Strong ties were formed with Jiu-Jitsu International and annual conventions in Canada, Europe and the UK were attended for many years. In addition regular visits were made to the London Jiu-Jitsu Centre headed by Prof Richard Morris. Dave also trained with the French Federation of Goshindo in Charleville-Mezzierres in France, and with Sensei Ron Yamanaka (3rd dan Ju-Jitsu, 8th Dan gung fu, 5th Dan Karate) in his Toronto dojo and with

Sensei John Therien, 8th Dan Ju-Jitsu in Ottawa. Instruction was received at the dojo of Prof Wally Jay in San Francisco on more than one occasion and opportunity was taken to experience the JKD styles of Paul Vunak of Professional Fighting Systems in Los Angeles. Additional experience was frequently undertaken in Europe with Sensei Auvo Niiniketo, 6th dan and head of Hakuto Ryu Jiu-Jitsu in Helsinki, Finland, and several trips were made to the world headquarters of the World Ju-Jitsu Federation in Liverpool. The heads of many of the organisations mentioned have also visited New Zealand at Dave’s invitation to conduct special seminars in their respective arts.

Events that truly shaped his organisation “Samurai-Arts” were close involvement with Master Swordsman and Aiki-bu-Jutsu specialist Toshishiro Obata, Soke in the mid 1980’s, Shizuya Sato Sensei (head of Kokusai Budoin, International Martial Arts Federation, Japan) and Shihan Alfred Gugel who runs a traditional Ju-Jutsu organisation in Germany and Switzerland. Close contact and regular training is continued with all of these masters and they form the source of Dave’s qualification base today, which amounts to over 20 Dan grades in various arts. Including Ju-Jutsu, Batto-Jutsu, Shinkendo and Aiki-Bu-Jutsu, along with dan grades from Jiu-Jitsu International, World Kobudo Federation and the World Ju-Jitsu Federation. The highest single grades held are Toku-E traditional grade in Shinkendo from the International

Butler now represents all three organisations in New Zealand, teaching a mix of Shinkendo, traditional and modern Ju-Jutsu and Bo-Jutsu.

Butler polished his sword-skills as recently as November last year with Kaiso Obata, however another overseas tour is currently being planned. This will further advance skills in Shinkendo and Aiki-Bu-Jutsu with Kaiso Toshishiro Obata, Kysuhu-Jutsu with John Therien, Shihan, in Canada, and Ju-Jutsu with both Alfred Gugel, Shihan, in Germany and Sato Sensei in Japan.

Dave Butler’s ultimate goal is now being fulfilled – to teach authentic, unadulterated Bu-Jutsu to students who are dedicated and committed to the cause.

At the 2002 Awards, Dave will be inducted into the New Zealand, Australasian and World Karate Union Halls of Fame.