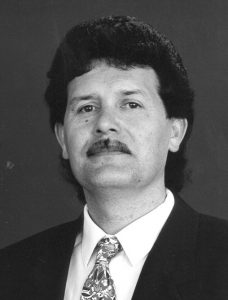 Inducted into the A.M.A.H.O.F.(Inc) for 2002
Jiu Jitsu Martial Artist of the Year

Inducted into the W.K.U.H.O.F. for 2002
Jiu Jitsu Martial Artist of the Year

Dave Millar has been involved with Martial Arts for over 25 years having had his first introduction to the arts in the late 1960’s. Although his main system is Jiu Jitsu he has made it his business to become involved with many of the other martial forms and their Instructors which has held him in high esteem among his peers. He has represented his country on a number of occasions at International events and is proud to say that he was a member of the 1st New Zealand Team to compete at the 1st World Council of Jiu Jitsu Organisations championships held in Canada 1984.

On the local scene he has been involved as a competitor, Coach, Referee/Judge at Regional and National Multi style events, and retired from competition in 1990.

Although he has trained with and been taught by several Instructors he holds his former mentor Professor Steve Heremaia in high regard. “He gave me the confidence and ability to succeed,” says Dave.”If it were not for him I would not have turned pro. and taken Jiu Jitsu into schools some 18 years ago. I am truly grateful to him.”

In 1997 along with Kati Unuia of Tien Shan Pai Fame he co/founded the New Zealand Martial Arts “Hall of Fame” where 12 of the country’s first tier were inducted in the city of Hastings. Three years later he himself was inducted into the next Award ceremony in Palmerston North and was voted unanimously as President of NZMAHOF, a position which he still holds.

Dave is known as a straight shooter and has no time for the political, egotistical ways of some of the brigade, who in his opinion, have done nothing to further the relationships of the diverse systems that we have today. “My main job is to make sure that my own students continue to enjoy their training, and that Jiu Jitsu remains as an option in the many public/private schools that I have taught in, and finally that N.Z. martial artists are acknowledged for their outstanding contribution in the Hall of Fame, free of bias, style, race or creed.”

Dave is a Board member of the N.Z. Sokeship Council. At the 2002 Awards, Dave will be inducted into the Australasian and World Karate Union Halls of Fame.