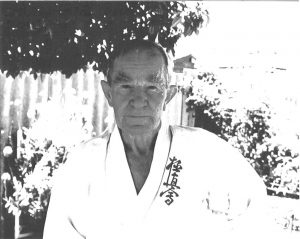 Inducted into the A.M.A.H.O.F.(Inc) for 2001
LIFETIME ACHIEVEMENT MARTIAL ARTIST OF THE YEAR

Inducted into the W.K.U.H.O.F. for 2001
LIFETIME ACHIEVEMENT MARTIAL ARTIST OF THE YEAR

Born 27th April 1927, Sensei William (Bill) Brain started his life on a farm in Victoria, which he and his family left about 1940 when they moved to Melbourne. He finished high school, and went to teacher’s college. There he majored in first year snooker and second year poker. With Honours ! After a few years of teaching he left to join the taxi industry, as his father had done.

Sensei Brain had been studying boxing for a number of years, so it was natural to progress to other martial arts. In 1950 he joined the Silver Top Combat Club, a judo club run by Frank Clarke who was a student of Jack Cox (2nd Dan Kodokan Judo). Later Frank left the club and Sensei Brain took over.

At this time he invited a number of asian instructors to teach at the club, and one of those men was Kim Chon Yung (4th Dan), the whole 6ft of him. Kim stayed for two years teaching Sensei Brain Karate and jujutsu and was later followed by Master Hyung No (5th Dan) who like Kim taught at the club for two years. Then came one of those political muddles, Re: the Korean war, so no more Korean instructors were permitted.

Later Yoshiaki Kato (5th Dan) was sent by Masutatsu Oyama to teach for two years. Sensei Brain, already a Black Belt, received a first dan from Kato Sensei in 1967. Through the 1950’s and 1960’s Sensei

Brain performed many demonstrations in Victoria, many of which were published in newspapers. He wrote many articles on martial arts that were published in the Herald Sun and the Journal Silver Top-ics. He left Melbourne in 1970 to move to Perth where he started teaching again.

He received a second dan from Oyama Sensei while he was in Singapore in 1976. He continued his training and his other hobbies such as hunting and flying his aircraft.

As a member of the West Australian Karate Association (WAKA) he was promoted to 4th dan in 1986. Sensei Brain had been the Honourary chief instructor for the WAKA since its formation in 1963.

In 1996 Sensei Brain was knighted for his work in promoting and teaching karate and ju-jutsu, as a Commander of the Order of the Banner by His Exalted Highness Prince Jah, Nizam of Hyderabad, Patron to the Society of Ancient Martial Arts.

Sensei Brain is a member of the Kokusai Budo Koryu Kyokai, Japan, an official for the Sekai Budo Renmei, and the current president of the West Australian Karate Association and was promoted to 6th dan in Jan. 2001.

Some of Sensei Brain’s direct students and associated students went on to be senior instructors in their own right, they include Fred Pedley, Bill Tysen, John Napier-Winch, Jack Rozinsky and Eddie Emin.

Sensei Brain is an experienced rifleman and was the Secretary, Perth Field Rifle Club, from 1978-84. From 1976-1984 he was also the President of the Pinjar Shooting Complex to the north of Perth. He has been a prolific writer of short stories for the Herald Sun and Technical articles for the Royal Flying Club, and written the book €œEric or Was It € in 1997.

Today Sensei Brain spends his time as an advisor to the martial arts and hunting in the West Australian outback.