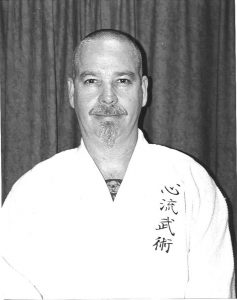 Inducted into the A.M.A.H.O.F.(Inc) for 2001
KOBUDO MARTIAL ARTIST OF THE YEAR

Inducted into the W.K.U.H.O.F. for 2001
KOBUDO MARTIAL ARTIST OF THE YEAR

Shihan Wayne Hanley was born on 11th April, 1959. He currently holds Yondan in Jujutsu and Rokudan in Kokusai Okinawa Butoryu Gohokan and is a full time Martial Arts Instructor at his school Kokoro Ryu Bujutsukan.

He began training in a Korean style of jujutsu called Soo Bakh in 1970 at the age of eleven and continued this art until his Instructor departed to live in another state in 1974 when he was graded a Junior Instructor Black Belt Red Tips at the age of fifteen.

During the period 1974-83 Shihan Hanley sampled various martial arts such as Karate, Wing Chun Kung Fu, etc. In 1983 he started started Jujutsu/Bukijutsu, and have trained in and taught these arts ever since. During this time he has continued to study a variety of other martial arts and has successfully achieved many passes in the Dan Grade examinations.

He was granted his Yondan through the Australian Shihan Kai and was graded by Kancho Barry Bradshaw 10th Dan Jiu Jitsu. His Godan and Rokudan are from the Okinawa Butoryu Gohokan Karatedo Kyokai, and were awarded by Ron Goninan Shinshi 8th Dan. He also holds an Advanced Rank in the Floro Filipino Knife System and has trained in European Fencing as well as a number of the natural healing modalities.

Shihan Hanley has a community involvement as a Member and Instructor for the Campbelltown & District Police & Community Youth Club from 9 February 1993 to 1998. He is a Committee Member of the Campbelltown-Koshigaya Sister Cities Association from 1990 to current date. In October 2000, with the assistance of the Campbelltown-Koshigaya Sister Cities Association, the City of Koshigaya, and the Koshigaya Kendo Renmei he was able to again travel to Japan and take a delegation of his instructors and students to both train in various martial arts and demonstrate Kokoro Ryu Jujutsu.

Over the years Shihan Hanley has trained and hosted many visiting Sensei and Instructors from both Japan and America, as well as hosting workshops for the Australian Ju-Jitsu Association (NSW Division) and Raymond Floro (Floro Knife System) who he trained with during 1998 and 1999 obtaining an “Advanced” Rank. He continues to train with Andrew Melito Sensei of Meirito Ryu Shintodo (Melito School of Japanese Swordsmanship). Vince Sillas from the Sanbukan Dojo in U.S.A. visits his Dojo on average 3 times a year for the past 7 years to train and teach.

His students are encouraged to attend seminars, workshops, tournaments and to participate in public displays & demonstrations to broaden their knowledge and experience.