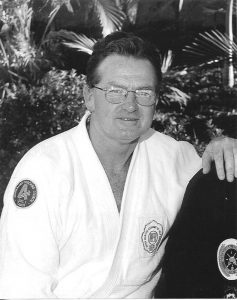 Inducted into the A.M.A.H.O.F.(Inc) for 2001
JUJUTSU MARTIAL ARTIST OF THE YEAR

Inducted into the W.K.U.H.O.F. for 2001
JUJUTSU MARTIAL ARTIST OF THE YEAR

Sensei Peter Wilson began training at the age of 38 with the Queanbeyan RSL Judo and Jujitsu Club at the Tharwa Branch in the ACT.  The club later changed its name to the Peter Morton Academy of Self Defence.  Sensei Wilson enjoyed training at the Tharwa Branch of the Academy because it was very small which made it very friendly and a great venue to train, even though a training session included a round trip of 150kms.

Sensei Wilson started teaching juniors once he had gained his yellow belt in June 1988.  From then on he was always at the junior classes teaching and helping Sensei McInerny every training session.  Early in 1991, he was nominated to commence training for Shodan and successfully completed this course in August 1992.

Being keen to further his training and instructing, he decided to open a new Branch within the Academy.Â  In September and October of 1992 he set about advertising and doing demonstrations with the aim of finding and enticing new students to join the Branch.  The newly graded Black Belt squad for 1992 helped out with the demonstrations. The Branch, called the Kaleen Branch of the Peter Morton Academy of Self Defence, opened its doors in Late October 1992 with thirty-five junior students and twenty senior students.  By the year 2000, 4 brown belts from the Kaleen Branch had successfully graded to Black Belt.

The Kaleen Branch, since commencing operations, has been conducting demonstrations at various fetes and functions. Sensei Wilson has been involved in running many women’s Self Defence courses and also special classes for the Girl Guides.  Sensei Wilson, through his Branch at Kaleen, collects donations to help out the Kids with Cancer.  One particular fundraising event was for Millie, who was only 4 years old and had leukemia.  The Kaleen Branch raised $150.00 through a gold coin donation.

Sensei Wilson’s Branch at Kaleen has been responsible for publishing the National newsletter over the last couple of years.Â  The Kaleen Branch members gather and co-ordinate information to produce a successful newsletter.  Peter ensures that the newsletter is completed on time and organises it to be printed up and sent out to all Branches in Australia.
A yearly event held at the Kaleen Branch, and orchestrated by Sensei Wilson, is the National Children’s Seminar. Every year since 1993, the number of children attending the Seminar has increased which is testimony to the Sensei’s organisational skills.Â  Children attend the Seminar from the ACT and NSW Branches.

In 1994 he was appointed as the National Secretary for the Peter Morton Academy of Self Defence and still holds this position today.  This job entails: organising committee meetings; notifying all Branches on a regular basis of changes and keeping them up to date with any new developments within the Academy. He keeps records on coaching accreditations; making sure members are all up to date; each year renewing all the insurance’s and keeping a file in order with all membership numbers.  In 1995 he was promoted to Nidan. He also held the Treasurer’s position between 1994 and 1999.

One of Sensei Wilson’s main jobs as Secretary is to organise the Black Belt presentations and make sure that all the Belts are embroidered correctly and in time for the presentation evening. He is also the master of ceremonies at all the Academy’s functions and organises most of these functions as well.

A big year was in 1998 when he and his team from the Kaleen Branch organised the Academy’s 36th Anniversary National Seminar in Canberra. The Seminar ran for 3 days and had an attendance of 120 students.  It was a very successful weekend with plenty of workshops and guest speakers from the ACT Australian Institute of Sport. In 1999 Sensei Wilson received his Sandan.

Over the past 12 months he has assisted Renshi Scharrer and Shihan Rowley with rewriting the Academy’s constitution. This has involved many hours of work and the academy members will benefit greatly from the changes.

Sensei Wilson has also been involved in community activities.Â  He enjoyed conducting fitness training for the under 16 at the Ainslie Australian Rules Football Club. He conducted these training sessions in 1997 and 1998 on a regular basis. He also taught break-falls to both the under 14 and under 16 teams during that period. The football Club was very appreciative of the difference this made to injuries.

One of Sensei’s favourite activities to keep fit is to get out on the road and run for long distances, on a regular basis, this gave him time to relax and think about future plans and his goals in life.

Over the past years he has been involved in the operation of the Neighbourhood Watch program in his community.  His main job was to coordinate the engraving of personal articles in people’s homes.

Unfortunately he had to retire from this program after 2 years due to work and martial art commitments.

One of his most rewarding aspects while instructing and participating in Martial Arts, is seeing young children who are badly uncoordinated and have some disabilities, grow through the Martial Arts and be able to see the look on their faces when they grade for their first belt. Peter finds this the most rewarding time of the sport.

Sensei Wilson finds that one of the great things about martial arts is the camaraderie between the people in Martial Arts.  There are many wonderful people who give of their time and friendship and don’t expect anything in return and this makes for a great Academy.  His Family can be included in this list of people. He has one son graded to black belt, another senior brown and the third a junior blue. His wife has also completed the women’s Self Defence course and obtained a white belt with yellow tip.

Sensei Peter Wilson also owns and operates his family business over the past 20 years. Working many long hours but finding Marital Arts the relaxing side of his life.