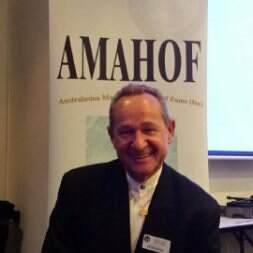 Inducted into the A.M.A.H.O.F.(Inc) for 2001
FREESTYLE KARATE MARTIAL ARTIST OF THE YEAR

Inducted into the W.K.U.H.O.F. for 2001
FREESTYLE KARATE MARTIAL ARTIST OF THE YEAR

Renshi Zlatko Peter Kitak was born in Slovenia on 26th June, 1956. He arrived in Australia in 1967 and his introduction to Martial Arts began in 1972. Phil Colgate was the person who first showed him some moves that were interesting; he was a student himself and a part-time stunt man. His first lesson in a full Gi was at Nedlands University (UWA).

During the seventies to mid seventies he went to a lot of Martial Arts Clubs such as Brian Mackey (Goju – Ryu). Japanese origin at the time meant nothing to him from one style to another. He also visited Jan De-Jong, a very well respected Martial Artists today, to look at his Penchak Silat style originating from Indonesia. He also visited the Subiaco Police youths boxing club for boxing lessons. All these events were driven by himself as part of growing up and receiving an introduction to the new sport and life in Australia. His problem at the time was understanding English and this was a good opportunity to meet people with similar interests.

Martial Arts in the seventies was growing with many clubs opening, action movies were also gaining strength. Bruce Lee, Chuck Norris, Benny the Jet Erquedes, Bill Superfoot Wallace and Dan Isentos were his idols at the time and he has since had the opportunity to meet some of them at various seminars in Australia.

Renshi Kitak received his Shodan with Sen-Do-Kai in freestyle karate in Perth, Western Australia, in1981 and his Nidan in 1982. Whilst in Browns Bay, Auckland, New Zealand. In 1988 he received his Nidan in Kali Eskrima at Terrigal, Central Coast of New South Wales while studying under sensei Gary Johnson. In 1990 he trained at West Burleigh in Queensland and gained his Sandan in Freestyle Karate under

During Renshi Kitak career, he has also received an understanding that politics can have big implications in the Martial Arts. His own view is that of passion to achieve his goal and pass this knowledge to any person wishing to learn, with reward coming from the students learning progress rather than financial gains.

Renshi Kitak has attended many seminars on varying martial arts during his career. He has performed in many tournaments and particularly enjoys all kata (forms) styles of competition. He continues to study boxing with Nick Conditsis (a former NSW Golden Gloves and Professional boxer) and has been studying Iaido and Kendo since 1998.

Renshi Kitak has been heavily involved with accredited training of Security Personnel and is the company Director of his own business, currently situated in Queensland but operating his business, East West Security Training & Consultants, in several areas of Australia.