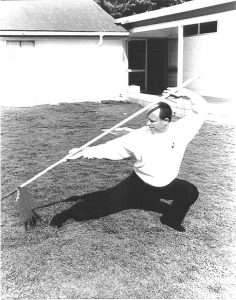 Inducted into the A.M.A.H.O.F.(Inc) for 2001
SHAOLIN KEMPO MARTIAL ARTIST OF THE YEAR

Inducted into the W.K.U.H.O.F. for 2001
SHAOLIN KEMPO MARTIAL ARTIST OF THE YEAR

In the early 1970’s Sifu Palmer began a serious quest into the deeper study of martial arts. He, along with good friend and training partner Mike Ryan, found Shaolin Kempo and after a probationary period were accepted as students of Grand Master Robert Gemmell.

Sifu Palmer has a real passion for Kempo and threw himself into his study. He would find any chance to train, read about or discuss martial arts. Friends and family recognised this dedication with many of them following his lead and starting themselves. His wife, Marilyn, is a 3rd degree Black Belt and assists with teaching classes.

Â He has always embodied the concept of Brotherhood inherent in the martial arts. Sifu has led the way with his loyalty and dedication and has helped many others over the years to understand the deeper principles and underlying philosophies of martial arts. In his business, his employees are almost exclusively Kempo students. This has helped to maintain excellent morale, low staff turnover and high productivity with everyone sharing a common interest.Â

During the mid 70’s Peter Delamere, Grand Master Gemmell’s representative in Auckland, lost his battle with cancer. This tested the dedication of the Auckland students and only a small number continued regular training. To advance further required travel to the Honbu in Wellington or arranging for Grand Master Gemmell to travel to Auckland. Sifu Palmer was one of the few that would make regular trips to Wellington and always be available in Auckland.

IN 1977 Sifu Palmer graded to Black Belt and over the next few years was heavily involved in teaching Kempo and assisting Kyoshi Mike Ryan to get a full time Dojo in Takapuna. In 1982 he started his own Branch at Browns Bay and continues to run this now.

As a technician Sifu has developed an excellent understanding of the continuous movement and returning fist concepts of Kempo. He is also a Master of Weaponry and has done many demonstrations promoting the Kempo weapons. He not only has the skill himself but also has the ability to pass it on, with many of his Black Belts achieving championship titles and also progressing to high ranks.

Sifu Palmer continues to be a student of martial arts, continuing with his studies of Kempo and also extending to Tai Chi Chuan, Ba Gua and Hsing I. As a senior grade and member of the Executive he plays a key role in the ongoing development of the Shaolin Chuan Fa Association.