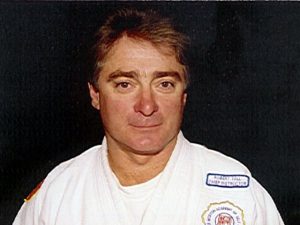 Inducted into the A.M.A.H.O.F.(Inc) for 2000
JUJITSU INSTRUCTOR OF THE YEAR : NEW SOUTH WALES

Inducted into the W.K.U.H.O.F. for 2000
JUJITSU INSTRUCTOR OF THE YEAR : NEW SOUTH WALES

Renshi Toll began training in 1972 at the age of 22 years. He began training with the Queanbeyan headquarters, Crest Road, under Peter Morton, James 0’malley and Dennis Rowley. While progressing through the grades Robert also did extra training & teaching both juniors and seniors at the YMCA in Canberra Branch, Bungendore branch, Corroboree Park branch, Tharwa branch, Queanbeyan RSL branch and Turner branch. His Shodan black belt class of 81 was taken by Renshi Dave Rowley and Sensei Dave Grubb, with extra fitness training by Peter Morton.

After receiving his Shodan he continued teaching throughout the branches and was also asked by Dave Rowley to assist him with the next black belt class. At the conclusion of the successful black belt grading Peter Morton approached Renshi Toll to take over, as the Chief Instructor of the senior class of the Queanbeyan RSL branch, from himself. He held this position until December 1988, when he moved to Salt Ash. Throughout this time he continued to teach at Tharwa branch.

After moving to Salt Ash in 1989, Renshi Toll with the help of his wife & three children (who had previously trained in Queanbeyan, Bungendore and Tharwa), founded the Salt Ash branch. Since founding the Salt Ash branch 17 members have successfully graded to black belt. Renshi Toll is very proud of the fact that his wife and three children are all second dan black belts and that his ever growing family are all involved in the club.

Renshi Toll became interested in self hypnosis/power of the mind/visualisation, in 1980 whilst training for his black belt and undertook a basic course. Throughout the years he has developed this knowledge which has allowed him to share this with his students to visualise themselves in winning positions, to control emotions and pain and to improve their everyday life.

As far as Renshi Toll is concerned the best thing about the Peter Morton Academy of Self Defence is the people involved. He has developed great respect and formed many close relationships with those involved from both junior and senior ranks, including Peter Morton whom he holds in great regard. Watching individuals and families grow and develop is the greatest compensation for the many hours of teaching.

One of the most inspiring people Renshi Toll knows is his wife Gail, she began training for her black belt when aged 42, three weeks after having knee surgery (the other knee continued causing a great deal of pain). Whilst training for her black belt she managed the family home, worked as a job sharer doing shift nursing in an aged care home, helped out with the family business and looked after one of her grandchildren during the day.