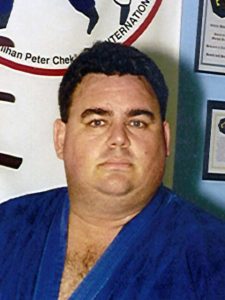 Inducted into the A.M.A.H.O.F.(Inc) for 2000
JUDO & JUJITSU INSTRUCTOR OF THE YEAR : WESTERN AUSTRALIA

Inducted into the W.K.U.H.O.F. for 2000
JUDO & JUJITSU INSTRUCTOR OF THE YEAR : WESTERN AUSTRALIA

Shihan Morgan was born in Western Australia on 12th November 1961and began learning Jujitsu at the age of six at his local Police boys club under the instruction of Sensei Pottinger & Sensei Mercer. His parents had introduced him to Jujitsu with the aim of improving basic co-ordination skills and to develop his self-confidence, as do most parents. Being a relatively new activity for children, jujitsu appeared to be a reasonable alternative to boxing.

As an enthusiastic youngster he trained very hard twice a week, mixing his martial arts with his study of the classical and flamenco guitar. In the following years he progressed through the junior level ranks to attain his junior brown belt by the age of 13. Studying two very different yet classical forms of art, each demanding the application of mental and physical discipline was not fully appreciated by Shihan Morgan until many years later as a martial arts instructor and music tutor.

Although learning classical jujitsu was clearly a challenge, Shihan Morgan was now looking for a style that would offer him more than just intensive repetitive training. He was seeking something that would allow his techniques and ability to be really tested or at least under the pressures of competition.

In 1973 Judo sport was starting to make a definite impact in WA, and it was not long before it was introduced to the Scarborough PCYC, under the instruction of Sensei James Feeney a 3rd Dan Japanese graded instructor and current Australian Open Weight Champion.

Kelly (as did other jujitsu players) attended the first class of judo with some scepticism and mostly through curiosity. After only a short session, Shihan Morgan knew that he was smitten by the lure of the sporting aspect offered by Judo. He was so impressed with the Sensei (a man of a larger than life stature) that he knew this new style would become a regular event.

Shihan Morgan recalls that at the beginning of the class, Sensei Feeney lined up all the students and as does a Commissioned Officer inspects the troops, he slowly walked the line observing each youngster carefully. When he arrived at Shihan Morgan, he stopped and said with considerable authority ‘You’re definitely a Judo Player’ and then he moved on to the next who was greeted with a stern look and simply a grunt. Maybe Sensei do know what they are talking about afterall.

The transition for Shihan Morgan, from jujitsu to judo was considerably easy given the close relationship between the two styles. It was not till later that Shihan Morgan felt compelled to seek out and understand the intricate subtleties of both styles, which marked the beginning of his true martial arts career.

It was at about this time that this path of discovery was to be greatly enhanced when a close friend had given him an early publication of Master Mikonosuke Kawaishi’s ‘Method of Judo’ which he had picked up at a second hand book sale for less than two dollars. Now considered the best two dollars ever spent.

Though he continued with his study Jujitsu and several other styles (including Karate, Tae Kwon Do and Aikido) Judo was soon to become the main focus of his sporting career. Though it was his knowledge and ability in Jujitsu that was soon to prove invaluable, especially as a means of improving his contest awareness.

In early 1974 and after only six months of training, Shihan Morgan entered and won the junior boys U50 Kg State Championship Title and as a result he was selected to compete at his first Judo Federation of Australia, Australian Titles – in Melbourne.

This same year was also to become the beginning of his long standing relationship with a fellow AMAHOF recipient, Shihan Drew Fleming 6th Dan IJF (a 1999 inductee). In actual fact Shihan Morgan fondly recalls their first meeting as a 20-minute beating around the mat at the old Claremont/Swanbourne PCYC in Mt. Claremont.

Shihan Fleming was a recently retired World-Class competitor and new State Coach intent on getting the best out of his judoka. Although Shihan Morgan’s father was rather disturbed and dismayed by what he saw, he was even more shocked when a totally beaten and exhausted son pleaded to go back next week for more of the same, after crawling from the mat area.

This was to be the beginning of a succession of state titles and state team representations until approximately 1983, when he was forced from tournament due to a serious knee injury requiring reconstructive surgery. Shihan Morgan’s judo sport career bests include, numerous Judo Federation of Australia WA State Junior and Senior Championship titles, the gaining of a best junior national ranking of 4th and a senior national ranking of equal 8th in 1981.

In 1978, following the JFA National Titles in MacKay Qld, Shihan Morgan was selected to represent Australia as part of a Junior Australian Team to compete against a visiting team from Nagasaki prefecture Japan. The tournament was held in Brisbane and Shihan Morgan fought 16 year old Keizo KANO a shodan player in the Under 77 kg division category. Following the conclusion of their 5-minute bout, the match was drawn with both players having scored equal points.

It was during his mid teens, that Shihan Morgan was greatly influenced by a very amiable policeman, who also happened to be an accomplished judoka, by the name of William (Bill) Collidge. A true master in the art of strangles (shimiwaza), Bill always seemed to win his way out of the most unimaginable situations, by applying a strangle on his defenseless opponents. Shihan Morgan teamed with Bill as his junior sidekick in the training of navy and police recruits for about three years, before graduating from high school.

1981 aged 19 years, Shihan Morgan travel to Tokyo where he trained and lived for some three months at the Kodokan Institute, the home of Kano Judo in Japan. There he was validated as a brown belt senior, though this grade had been awarded by the JFA several months earlier.

Shihan Morgan was also honoured to train at the infamous ‘Keishicho Budokan’ (police judo club) under the personal instruction of Muira Sensei (who today is an 8th Dan at the Kodokan Institute). Sensei Feeney had been a student of Muira Sensei and it was through his letters of introduction that this privilege had been arranged.

During this period Shihan Morgan also privately trained with members of the Tokyo riot police in the police arts of hand to hand combat, police restraint and arrest techniques and in a wide range of street weapons.

In Dec 1981, Shihan Morgan joined the WA Police Service and throughout his 17-year career he worked in general patrolling, community policing, as a forensic expert and police trainer.

In 1988 Shihan Morgan opened his first martial arts school al. the Gosnells PCYC after receiving the permission from his long time mentor Sensei Feeney, who was now retired from teaching. It was also in 1988 that Shihan Morgan competed at the 1988 Law Enforcement Olympic Games in NSW, where he entered the open weight division gaining a silver medal for his troubles.

In 1994, Shihan Morgan was fortunate enough to have Master Peter Chek grace his dojo by choosing to become a member of the Jishin Academy. This opportunity has given Shihan Morgan the honour of studying with a true and bona fide master of the Kawaishi method. This unity has further seen the creation of the Kawaishi Method Federation of Australia Inc., as a non-discriminatory umbrella organisation created to represent all styles through the development of networks regardless of philosophy or affiliation.

Since starting his first school in 1988, Shihan Morgan has developed more than 15 dan grades of various levels, produced a significant number of international and national level players, been a state coach and managed several goodwill teams to Southeast Asia. The Jishin Academy now has two Perth and two country based dojo, with some 60 members currently registered with the academy. He has also acted as an ambassador for Judo Sport and assisted Hanshi Peter Chek in reviving the Kawaishi Method of Jujitsu and Judo throughout Australasia.

Martial Arts have obviously been a major part of Shihan Morgan’s life (some 32 of his 38) and this has often placed enormous strain on his personal family time. As all martial artist’s can appreciate, ‘much is often done for little’ though the rewards are usually far greater than the total demands.

Though if not for the unrelenting dedicated support and unquestionable commitment unselfishly given by his most lovely wife Kathy and four wonderful children, Sinead, Phillip, Daniel and Sonia his continued involvement would not be possible, and for this they should be duly recognised and sincerely thanked.

Some of Shihan Morgan’s major martial arts, personal and community achievements include: