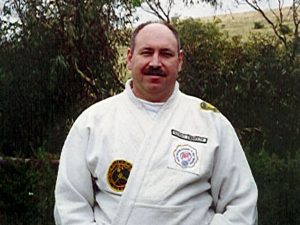 Inducted into the A.M.A.H.O.F.(Inc) for 2000
JUJITSU INSTRUCTOR OF THE YEAR : SOUTH AUSTRALIA

Inducted into the W.K.U.H.O.F. for 2000
JUJITSU INSTRUCTOR OF THE YEAR : SOUTH AUSTRALIA

Proven maintenance of an observance of the highest order has been displayed in the quality of students that Sensei Swingler has taught in 20 years with the standard of black belts produced in South Australia well respected in the Australian organisation that Sensei Swingler belongs. This respect has not just been for their physical abilities but also for their down to earth attitude and mental toughness.

In South Australia this respect for high standards was further recognised by his election as President of the SA Jujitsu Association which combined six different jujitsu styles. The purpose of the association was to expand the organisational knowledge and contacts with a series of training sessions and overseas guests.

Further proof of this observance is the number of instructors still training or returning after extended breaks to a club where nobody gets paid in monetary rewards, and motivation has to be more creative.

Since early childhood the Sensei Swingler has had an excess amount of energy requiring a socially acceptable outlet. This vitality was first put into Australian Rules football where in excess of 100 games were played up to A Grade level over a 10 year period, Cricket at district level and Badminton also at A grade level. Sensei Swingler managed to enjoy practising all at once until work and training for his black belt forced a choice. He continued to play & teach badminton obtaining his coaching certificate until after 12 years further pressures and martial art responsibilities required more time.

After obtaining his Black belt he started learning Tai Chi in 1984 under the guidance of a Kung Fu & Tai Chi Master Sifu Lee and continued until 1988 reaching assistant instructor level. After missing the training he returned in 1991 to continue development to instructor status and began a morning & evening Tai Chi class at the Department of Transport and continued to learn from Sifu until his return to his temple in Malaysia to take up his vows as a Buddhist monk in 1993. Since the departure of Sifu Craig he continues to train on a daily basis and has taken a number of national seminar training sessions.

Through the involvement with the Walkerville YMCA from 1985 – 1992 he regularly taught at lunchtime women’s self defence classes, kids holiday programs, organised demonstrations and raised money to buy equipment. This followed onto the work place located across the road where he assisted negotiations for corporate membership of Transport SA. Craig also served on the Golden grove/Salisbury Heights community action group as Vice President running briefing sessions between council delegates and the community. Over the years he has presented sessions to neighbourhood watch, the aged, visually impaired, scouts and the girl guides. Professionally he has served on the Executive of the Institute of Building Surveyors and the Institute of Building and was the State conference conveyor to over 200 delegates in 1994.