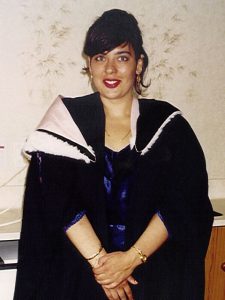 Inducted into the W.K.U.H.O.F. for 2000
TAI CHI INSTRUCTOR OF THE YEAR : NEW ZEALAND

Sensei Christine Gemmell first began Martial Arts at the age of two. This was in 1968. Her father and teacher, Grand Master Robert Gemmell, sat his daughter in the room where he would practise.

It did not take long for Christine to get involved and her father would place his daughter on his feet as he did sit-ups. This was prior to Christine being able to walk. Her upbringing was in the foot steps of her father, who lived and breathed the martial arts.

At the age of twelve Christine was already teaching the other kids in the neighbourhood. At age fifteen Christine took the Kempo-Bushido-Ryu Black Belt Grading. Upon the completion of the school’s standard grading, her father offered her the option of doing an additional part of her grading in the old school method, the way he had been graded. Christine accepted and endured what was a gruelling experience. Though it brought tears to her eyes, Christine knew that she had earned her Black Belt. Twenty years on from this, Christine holds the rank of 6th Degree Black Belt.

Recognised as the country’s leading coach for young competitors, she became known as a teacher of Junior Champions. Time after time her Green Belts defeated New Zealand’s top Junior Black Belts. So embarrassing was this at the National contest level, her father prompted by senior Tournament Officials suggested to Christine that her students were under graded, attesting to the high quality of the standard she personally set.

Christine’s own Tournament achievements include the Junior Female Open Championship and the Women’s Open title.

Having left school at the age of fourteen, Christine decided that she had neglected her education. In the same air of confidence that she had informed her father she would be leaving school, she informed him once again that she would be going to University to complete a degree in Psychology. This was at age 25. Ignoring the fact that she did not even have School Certificate or 5th form mathematics, considered a prerequisite to sitting a degree, Christine threw herself off the deep end, graduating four years later from Victoria University with a B.A. in Psychology.

As a part of her degree she took up Women’s studies and applied this to her own Self Defence and Tai Chi classes. She continues to apply her research in support of women.

One evening when returning home, she paused as she walked past her school’s Headquarters Dojo in Porirua. Caught in an emotional flashback, she suddenly realised she owed her academic success to her martial arts training. Excitedly she related to her father how she felt, and sought his support in returning to full time martial arts instruction. As she put it “it was where it all started for me”.

Once again the advice from her teacher was traditional. “If you really want to do it right, you need to get underneath and understand the Zen of martial arts.”

Christine already had a firm grasp of how the mind worked, through her training in psychology and her extensive trips to India where she researched martial arts styles there.

Commencing Chinese painting under the renowned teacher Stan Chan, Christine now has an appreciation of the “way of the brush.”

A full time year long media studies course gained her a Diploma in Media Studies. She puts this to good use with articles for the “Insights into Martial Arts” magazine.

Christine continues in her key role as Regional Director of the Shaolin Chuan Fa Association branches in Wellington and with the busy role of Branch Chief of the Headquarters Dojo in Porirua. As well as this she is currently completing her Masters Degree at Massey University.