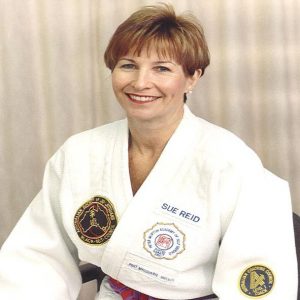 Inducted into the A..M.A.H.O.F.(Inc) for 1999
OUTSTANDING CONTRIBUTION TO JUJITSU

Inducted into the W.K.U.H.O.F. for 1999
OUTSTANDING CONTRIBUTION TO JUJITSU

Renshi Sue Reid, was born Susan Frances Kaye at Queanbeyan on 8th April, 1957. She attended both Primary and High school at Queanbeyan and went onto Tertiary Education in Canberra. During her growing up years, she participated in many different sports and represented at State level in Netball. She was also involved in the Royal Surf Lifesaving Movement. Being so close to the south coast she enjoyed water-skiing in the summer months and travelled to the Snowy Mountains for snow skiing in the winter. She married Michael Reid in 1979, and has two girls, Brooke aged 18 years and Ebanie 16 years. In 1987 Renshi Reid, Michael and their girls moved to Port Macquarie on the mid north coast of New South Wales, where they owned and operated a Motel.

Renshi commenced the Port Macquarie branch of the Academy in 1990 and the branch celebrates it’s 10th Anniversary next year. In 1997 She was honoured with the position of Women’s Co-ordinator within the Academy, overseeing 23 branches around Australia. She has also introduced Kinesiology into her instruction with tremendous results, especially with those with learning difficulties, she also runs educational exercise classes for children. Renshi Reid is actively involved as a Community of Advice Board Member for the region’s Base Hospital. She enjoys good company, good food and everything about life in general.

At the age of six years, Renshi Sue Reid began martial arts training in Queanbeyan, under the guidance of Soke Peter Morton. Soke Morton has been and continues to be a great inspiration to her. As the founder and namesake of her Club, Renshi Reid sees Soke Morton as a great role model as well as an amazing source of enthusiasm, on which she bases all of her own efforts, Soke Morton is indeed a legend in Martial Arts.

As a member of the Queanbeyan RSL Judo/Jujitsu Club, she progressed through the ranks as a student, and began instructing at a young age, then in 1971 was successful in grading for her First Kyu Black Belt at the age of fourteen. Renshi Reid remains the youngest ever to grade to Black Belt in her style.

She maintained her relationship with the Club, now known as the Peter Morton Academy of Self Defence, even after she moved to Port Macquarie in 1987. Through Adult Education and various schools throughout the region, Renshi Reid was asked to run Self-Defence Classes. It was from there, that she established a base and was able to form the Port Macquarie branch of the Peter Morton Academy of Self Defence in 1991.

This branch has gone ahead in leaps and bounds and saw its first squad of six members grading to First Kyu Black Belt at the Bateman’s Bay headquarters for the Peter Morton Academy in December, 1997. She also has her own Dojo which she trains at, enabling a variety of classes and times throughout the week.

As the highest ranking (Renshi Reid received her 5th Dan in 1996), and one of the longest serving females in the Peter Morton Academy, she has assumed the challenging role of leading female instructor. This allows her to monitor the progress of all female club members, and gives her the opportunity to have input into the Academy, regarding standards and techniques from a woman’s perspective.

During her continued study of martial arts, Renshi Reid became interested in the relationship between the mind and the body. As well as the brain’s ability to enhance the body and it’s performance capabilities. Hence she has successfully included Kinesiology into her lessons with the use of Brain Gym as an effective learning technique.

She has been actively involved in many school anti-bullying programs, as well as teaching Self Defence as part of school curriculums in both Queanbeyan and Port Macquarie. She has also taught self defence to disabled children, over the years and has had many private lessons with rape victims. She has also been involved in hospital Aggression Control Workshops, and is currently working on a new program for younger children’s’ fitness, self esteem and self defence. She is also often asked to speak at various Service Club meetings.

Renshi Reid is an accredited fitness leader, sports trainer, educational kinesiologist, Touch for Health Practitioner and dedicated Martial Artist who is constantly striving to learn more to enhance both herself and her students for the betterment of the Peter Morton Academy of Self Defence and Martial Arts in general.