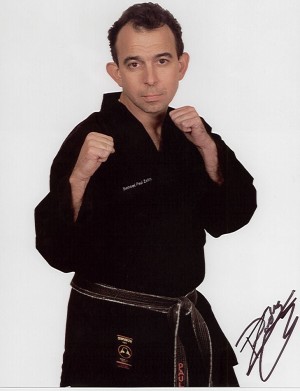 Inducted into the W.K.U.H.O.F. for 1999
KARATE PROMOTER OF THE YEAR

He began boxing under Jimmy Sharman in 1972 at Mareeba, North Queensland, and started Judo under the Kodakan Judo Association in 1973 to 1975. He then studied Rhee Tae Kwon Do from 1975 to 1979 at Bossley Park in Sydney and obtained the rank of Junior Black Belt. In 1979 he went on to study Ken Sei Kan Karate Do and continued on until 1981 at Greystanes, Sydney where he obtained the rank of Shodan Black Belt. From 1979 to 1983 he studied Koshu Kempo at Bossley Park, Sydney and obtained his rank of Shodan in that art too.

In 1983 he obtained his Sandan at the International Kempo Karate Academy. He was awarded his Godan by WCMA in 1995. In the same year he was appointed the NSW President of the International Sport Karate Association.

He was awarded Promoter of the Year 1998 by the All Eurasian Kickboxing Federation. Sensei is a member of the Martial Arts Industry Assocation. He has been the promoter three times for the World Cup of Martial Arts-International Tournament for 1995/98/99 and eight times promoter of C.C.P. – International tournament. 1992 through to 1999.