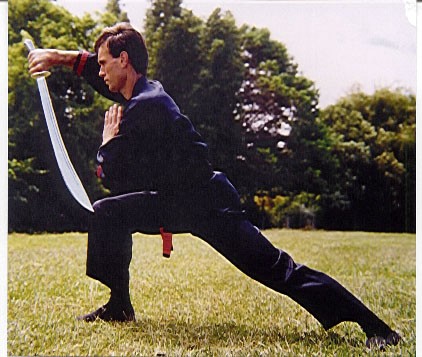 Inducted into the A.M.A.H.O.F.(Inc) for 1999
KEMPO INSTRUCTOR OF THE YEAR : NEW ZEALAND

Inducted into the W.K.U.H.O.F. for 1999
KEMPO INSTRUCTOR OF THE YEAR : NEW ZEALAND

Kyoshi Ryan influenced by his father began his training in Auckland New Zealand in the early seventies. At that time a few Judo and Karate clubs were teaching mainly Japanese Martial Arts. Upon hearing of the Kempo School run by his teacher of 28 years Grand Master Robert Gemmell, Kyoshi travelled to Wellington with the intention of becoming a student.. After an extensive discussion and explanation of Kempo, Kyoshi was finally accepted as a probationary student. This commenced one of the longest student-/ teacher relationships that has existed in New Zealand.

So keen was Kyoshi to learn that he transferred his Electrical Trade Apprenticeship to Wellington some 700 miles from his home. Kyoshi was accepted by the small but elite group of students at the Kempo Headquarters Branch. His rigorous seven days a week training soon propelled him to the front Ranks. Kyoshi eventually attained his Black Belt and returned to Auckland to open his own Dojo. After working in his father’s Electrical Business for several years Kyoshi made the decision to turn professional and teach Kempo full time. He opened his first full time Branch in Barry’s Point Rd. in the late seventies.

His teacher, Grandmaster Robert Gemmell, made many trips to this Branch encouraged by Kyoshi’s dedication and high standard of teaching. Kempo began to grow in Auckland with 5 Branches springing up, and Kyoshi was appointed Auckland’s Regional Director and Chief Instructor.

The Kempo school was expanding nationally and a Central North Island venue was secured for the bringing together of all the Branches now spread throughout the country. The Taupo venue included live-in, 6am to 10pm, daily training. Kyoshi attended all these events and this led to his National recognition and eventual promotion to KYOSHI. Through Kyoshi’s continued dedication both nationally and in his home city, Kempo gained a significant following.

Kyoshi covered the lst Auckland Regional Kempo Championships in 1976, This event has grown to be one of the largest Tournaments held in New Zealand. In 1998 the 22nd Annual event was celebrated over two days.

Kyoshi was made Deputy Chairman of Kempo Bushido Ryu and holds the position today. The KBR organisation is now one of New Zealand’s largest Martial Arts organisations and Kyoshi is recognised by many as a true Pioneer of Kempo in New Zealand.

Kyoshi’s two children Emma and Callum follow in their father’s footsteps as does Kyoshi’s wife Donna. The family now own the 4000 square foot Dojo in Auckland’s North Shore.

Kyoshi’s nomination by his teacher Grand Master Robert Gemmell is also the choice of Australasian Hall of Fame Inductee, Kyoshi Steve Heremaia, a Jiu Jitsu Master who teaches in Auckland.

In 1998, Kyoshi was graded 8th Degree in Kempo by his teacher, and the ranking was endorsed by the International Shaolin Kempo Technical Panel.

Kyoshi Ryan has consistently, over the past twenty years contributed to the community by way of the following: