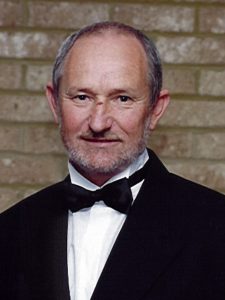 John Napier-Winch, JP, GCOB
Inducted into the A..M.A.H.O.F.(Inc) for 1999
OUTSTANDING CONTRIBUTION TO THE MARTIAL ARTS

Inducted into the W.K.U.H.O.F. for 1999
OUTSTANDING CONTRIBUTION TO THE MARTIAL ARTS

Sensei John Napier-Winch was born on 29th December, 1947, in Subiaco, Western Australia. He is married with three children and has a varied background in areas of engineering, martial arts instructing, writer and genealogy during his working life. He has held various managing and directorships in his professional carreer.

Sensei Napier-Winch started ju-jutsu at Johnson’s Nollamara club training under Frank Tydeman in 1956. Three years later he started Shotokan Karate at Nollamara training under Masutaro Kanegai from Broome and in 1963 became a founding member of the W.A. Karate Association (inc). For the following three years he studied Judo as well as karate and became an assistant instructor. In 1972 he was promoted to Chief instructor for the W.A. Karate Association and the following year elected President and held the position until 1986.

From 1973 to 1986 Sensei Napier-Winch won every W.A.K.A. Kata championship. In 1974 he was Elected Chairman for the W.A. Martial Arts Council and held this position until 1994. In 1975 he was a Judge & referee at the W.A. Kempo-kai championships. In 1978 he was awarded the W.A.K.A. Black Belt of the Year and he produced a documentary film on Karate. During the same year he was selected to be the personal bodyguard for Bob Hope and Sammy Davis Jnr during their respective tours to Perth. In 1979 he was awarded the Parmelia-Hilton Achievement Award and in 1980 he was again selected to act as bodyguard for Sammy Davis Jnr.

In 1985 he assisted Goheki Sensei in a demonstration of Iaido at Mt. Lawley. Later that year he was selected to be the personal bodyguard for Tom Jones while he was touring Perth. In 1986 he travelled to Japan and demonstrated karate and laido in Tokyo and Osaka. The following year he assisted Master Matsuno in a demonstration of laido and Kodachi-jutsu at Mt. Lawley during his visit to Perth. The same year Sensei Napier-Winch was selected to represent the W.A. Karate Association at the headquarters of the Shotokan, Tokyo, Japan and became President of the Traditional Shotokan Karate-do Association (inc) and held that position until 1990.

Sensei John Napier-Winch was awarded the title Lord in 1987 by HEH Prince Jah, Nizam of Hyderabad, with whom he was employed as an adviser between 1982 and 1995.

In 1989 he was appointed as Chief instructor for Karate for the Takenouchi-Hangan-Ryu-Matsuno-Kan (Shin-no Shinto-ryu), Kobe, Japan by the Headmaster Sensei Tsuneyoshi Matsuno who in 1995 granted the title of Headmaster of his own school – the Matsuno-Winch-ryu. In 1990 he became the President for the Society of Ancient Martial Arts and has held that position since.

In 1994 he was appointed a Justice of the Peace was also appointed Deputy Chairman for the W.A. Martial Arts Licensing Board Steering Committee by Wayde Smith JP, MLA who was the Chairman. While on this board John was involved in drafting recommendations to the W.A Government and compiling the Act for Parliament on behalf of Wayde Smith.

He has been Included in:

Main instructors of Lord John Napier-Winch who influenced him the most:

Sensei Napier-Winch has been awarded the following grades:

Headmaster of own school, 1995, awarded by Master Matsuno.

7th dan Karate by the Society of Ancient Martial Arts, 1994.