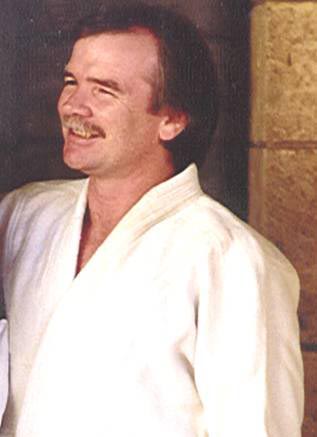 Inducted into the A..M.A.H.O.F.(Inc) for 1999
OUTSTANDING CONTRIBUTION TO JUDO : AUSTRALIA

Inducted into the W.K.U.H.O.F. for 1999
OUTSTANDING CONTRIBUTION TO JUDO : AUSTRALIA

Sensei Drew Fleming was born in Peppermint Grove, Western Australia, on 2nd June, 1948. He officially began Judo in 1956 as an 8 years old. However, his real introduction was much earlier when his father – now Hanshi Andy Fleming (AMAHOF Inductee 1997) – brought home Japanese visitors from the ships in Fremantle harbour to do some impromptu training in his backyard. As an energetic child of the times Sensei Drew Fleming copied his seniors and developed avert and lifelong interests in Judo.

Sensei Fleming is married with an extended family of seven children and is now living in the inner southern Perth suburb of East Victoria Park. Trained as a fully qualified printer by trade Sensei is currently operating his own Desktop Publishing company and produces a number of newsletter to help martial arts people keep in touch with updates and the continual change in training methods for his art. He is currently suffering from long term injuries incurred from the vigorous training regimes he has maintained throughout his long career.   He has spent much time with giving assistance to the Activ Foundation for people with disabilities and is a good example on how the budo system works within a community system.

Sensei Fleming has had a long and eventful competitive career in Judo ranging from winning his first State Championship at the age of eight years – the first year of his official Judo. In those days they ran Age groups  with no weight divisions.

Sensei continued to win, or be placed runner-up, in all his State Championships in the children’s age divisions until 1963 when he become the Junior Middleweight Champion of Western Australia.

From 1964 until 1975 Sensei Fleming was undefeated in any State Competition as the Senior Lightweight Champion and also held several Open weight Championship or Runner-up positions during the same period.

He represented Western Australia in the state Judo Team nine times between 1965 and 1975 winning medals in  seven of those years, and was the Open Weight Japan Consul Black Belt Champion. He represented Australia each year from 1972 to 1975 and was the Oceania Team Bronze medal winner in 1972 and selected in the team again in 1974.
Sensei Drew Fleming represented Australia at the World Championships in Lausanne 1973 and Vienna in 1975. He was the only resident West Australian to represent as a competitor in World Championships and also was a member of the Australian Team competing against Italy, Spain, Japan and Taiwan. He trained in Japan at theÂ  Kodokan, Nichidai, Waseda Universities, Seki Ju Ku, Keischo in 1973 and 1986.

He has coached many National medallists and representatives – including Bill Webb, Greg Marsh, Jan Maxell, Alex Wallingford, Dave Roberts, Steven Doherty and Christine Bednall.
Sensei Fleming has coached at the Australian Institute of Sport in Canberra and is a Former National Team and Olympic Selector for three terms (6 years).  He has organised many State courses, camps, national and international tournaments, hosted International Coaches under Coach in Resident Scheme, International Cultural Exchanges (including the Australian Masters Championship, Multisport Camps, National Senior and Junior Championships. He is a former and current State Chairman National Coaching Accreditation Scheme.  He holds the following qualifications: