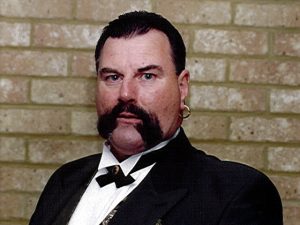 Inducted into the A.M.A.H.O.F.(Inc) for 1999
INTERNATIONAL MARTIAL ARTIST OF THE YEAR

Inducted into the W.K.U.H.O.F. for 1999
INTERNATIONAL MARTIAL ARTIST OF THE YEAR

Shihan Bruce Haynes was born and educated to matriculation in Australia. He is married to Ruth and they have a 29 & 27 year old daughters and a 22 year old son and one grand daughter.

He enjoys Rap music, especially Ice T, fishing and hunting and this is how he relaxes when he is not either teaching or competing in martial arts.

He especially enjoys the company of his wife as he would not be able to do what he does without her support and encouragement.

Shihan Haynes started in martial arts at seven years of age with jujitsu, under Shihan Mathew Komp 8th Dan, and reached the rank of Black Belt at the age of seventeen. He then went to Kyokushin Kai under Shihan Eddie Emin and started again from white belt and stayed there until reaching 5th Dan when he went to Japan to train under Kancho T.Azuma. Sensei Azuma broke away from Kyokushin Kai in 1990 and out of loyalty Shihan Haynes chose to stay with him as a 6th Dan and in 1994 was promoted to 7th Dan.

Shihan Haynes is currently the 35 times Undisputed World Tamashiwari Champion and twice veterans Kumite Fighting Champion. He has 38 Dojos in Australia (2 in Tasmania), 3 in South Africa, 22 in Russia, 1 in New Zealand and one in Florida USA.