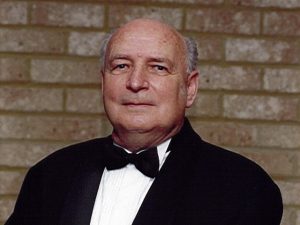 Inducted into the W.K.U.H.O.F. for 1999
LIFETIME ACHIEVEMENT : JUJITSU

The son of a Ukrainian Russian living in France, as a young boy Shihan often found himself the victim of racial taunts. His father allowed him to take up boxing, but this did not appeal to Shihan’s stealth like body and sharp mind. He was seeking something more mentally stimulating and challenging. A family friend recommended that he should try a new style of fighting that had just started in the Latin quarters. Shihan spoke with his father, and an interview was arranged with the teacher – Mikonosuke Kawaishi.

Professor Kawaishi, a master of Ju-jitsu and graded student (4th Dan) by Professor Jigoro Kano the founder of Judo, was employed by the French Government to provide instruction in the oriental methods of control to the French police. Like Mayeda in America and Koizumi (his long time friend) in Great Britain, Kawaishi spread the message and style of Ju-jitsu / judo where ever he travelled. It was to supplement his income that he opened his first club in the Latin quarters and it was there that Shihan began his journey.

During his interview, 12 year old Shihan was required to explain in length why he wished to study martial arts and what it was he hoped to achieve. The sincerity of his answers was to determine whether Kawaishi was to accept him as a new student or not. This selection process was very vigorous, and the duty bound oath drawn between Sensei and student was a contract not to be taken lightly. Having been selected as suitable, Shihan was now permitted to study with Kawaishi, in the presence of great Judo legends such as Moshe Feldenkreis.
After five years of intensive instruction, Shihan and his family became prisoners of the German army in 1941. His father a journalist had written adverse articles about the German occupation, and for this he was arrested and sent to a work concentration camp in Berlin. Shihan, with his uncle and a cousin were all sent to a work camp in Czechoslovakia. After 18 months of incarceration, and one failed escape attempt, Shihan made another attempt, knowing that if unsuccessful it would be his last. In the midst of an oppressive winter after dodging bullets and grenades, and being literally hunted by soldiers and dogs, he hid beneath the carriage of a goods train. When the train finally stopped, many hours later, weak, cold and hungry, Shihan ventured from the semi-sanctity of the train to discover that he had arrived in the heart of Germany – Munich.

Though fluent in French and Russian, his German was not polished enough to pass as a local. Shihan stranded and without identity papers, wandered the war torn streets posing as a lost and disorientated orphan that spoke a dialect of German. Possibly by chance or just through good fortune, a German soldier who had recently returned from the Russian front took him in.
Provided with this new identity, he was able to live among his former capturers, even becoming a volunteer fire brigade officer winning an award for his acts of bravery. He lived this way for several years, until he was recognised by a soldier stationed at the work camp from which he had escaped. Again on the run, he remained so until the end of the war. Following the war, Shihan returned to Paris and again started training in Ju-jitsu and judo directly under master Kawaishi who had- himself been incarcerated in Manchuria for a time.

In 1947, at only 22 years of age he won the prestigious Kawaishi medal (Champion of Paris). He defeated ten much higher graded players, each by full point wins and all this was achieved in less than twenty minutes. Shihan Kawaishi awarded him with his Shodan on the spot. He also received from Shihan a leather bound (limited) edition (#766) copy of his own book entitled “Ju-Jitsu – My Method of Judo”. Eight years later this book was translated into English by E.Harrison a former journalist in Japan and a convert of martial arts.

Soon after the ‘Champion de Paris tournament’, Shihan was sponsored by the French Army, for whom he was an unarmed combat instructor to the elite para-troopers, to travel to Japan and train at the prestigious home of Judo, the Kodokan.

It was during this time that Shihan was a live in guest at Master Kawaishi’s home. As Shihan recalls on one special evening, he was awoken at approximately two in the morning. The purpose, was to practice a move that the master had dreamt of, and whilst it was fresh in is mind he wanted to test its practicability on the mat.

It was following an 18-month stay in Japan that Shihan travelled to America, where he lived in New Orleans for almost a year. During this period he also visited Panama City and Colombia where he taught and trained.

In 1950, he arrived in Australia (Sydney) as a voluntary migrant, where he worked in a range of jobs including as a farmhand, chef and martial arts instructor until 1953. Then he left the mainland for an attractive job in Tasmania, where he settled and began the first ever school of Judo and Ju-jitsu in 1956.

It was known as the “Shihan Check Academy”, based at the Sandy Bay Rowing Club, where he taught three one hour training sessions each week. By 1961, the school had grown from seven originating players to approximately 1,200 players and seven (7) schools throughout Tasmania.

Shihan also awarded three Shodan grades during this time, grades acknowledged by the Victorian Judo Association, a member of the International World Ju-jitsu, Judo and Judo-Do Federation. This body was headed by Sensei Wally Strauss a 5th Dan Judoka also from Europe. Shihan being the only student of Kawaishi living in Australia, soon became an invaluable source of knowledge to Sensei Wally Strauss, who was most interested in the Kawaishi number system of techniques.

This concept, that Kawaishi had created, was a unique number system. It intrigued Shihan for he knew the true reason for Kawaishi’s choice to call the techniques by number and not by their Japanese names. Simply, Shihan Kawaishi had realised that many of his students found it difficult to remember and pronounce the Japanese names therefore he simply stuck to numbering them. This fact becomes even more obvious when reading Kawaishi’s original private edition publication.

Between 1957 and 1964, Wally sent a number of senior Dan grade students to Tasmania to train directly under Shihan, therefore taking away with them the knowledge of Kawaishi Ju-jitsu and Judo. This was then taught to others on the mainland through other affiliated clubs controlled by Sensei Strauss.

Between 1964-67 Shihan travelled throughout NSW and Qld before finally settling down in Canberra where he worked as a Government employed Photographer. He also taught Ju-jitsu and Judo at the local Police Boys clubs as a master level instructor. It was also in Canberra that he met and married his lovely wife Julie.

In 1968 they both travelled to Darwin where he managed a government hostel and then later a hotel/ nightclub. Shihan also taught Judo and self-defense to the Northern Territory Police recruits. It was in 1971 that they both returned to the ACT, where Shihan managed public service accommodation hostels before becoming a government press photographer. During this time he also returned to teaching jujitsu and judo for the police boys clubs.

On the 12th of October 1981, he was awarded a Civic Award by the Governor of Australia, His Excellency Sir Zelman Cowen for his dedication and tireless work in the interests of the community as a martial arts instructor and member of community.

In 1994, Shihan and Julie decided to move to Western Australia. Shihan soon began searching for a Club that followed the teachings of the Kawaishi style. In January 1996, Shihan became a part of the Jishin Academy. He has since entrenched himself as our most valued member of the teaching team, becoming affectionately known as the “Walking Encyclopedia” of martial arts by the students and his peers.

Sensei Morgan once inquired as to the reason why he had never advanced in grade. Shihan answered – “I am not a political martial artist who values the importance of superficial adornments to please others – I consider myself a martial artist, a student of Kawaishi and with no person in Australia more senior in that style, it was difficult to attain advancement of grade.” Accepting this fact, Shihan has unconditionally continued imparting his knowledge to anyone willing to learn.

In 1996, Shihan Sir Andrew Fleming OAM, then an 8th Dan acknowledged that it was an embarrassment to have someone with such a unique history, and depth of knowledge so grossly under graded. Therefore Shihan was awarded his 4th Dan in Kano Judo. Shihan graciously accepted these grades acknowledging the sincerity of Shihan Fleming’s actions.
In June/July 1998, the Jishin Academy participated in a very successful tournament tour and Junior Judo Exchange program of Singapore and Malaysia.

It was during this trip, that Shihan represented the Academy as a coach and ambassador for the Kawaishi method, mixing with respected senior officials and Shihan from several other countries. Shihan’s demonstration of technical knowledge and his physical agility simply reinforced his rightful position to be ranked amongst masters, such as Hanshi Andrew Fleming, now a 9th Dan representing the Judo Australia contingent, and the Presidents of the Singapore Judo Federation and Malaysia Judo Federation both 8th Dan.

It was upon returning to Australia that Sensei Morgan took the unprecedented steps of having Shihan elevated to the rank of 8th Dan – Hachidan specialising in the Kawaishi method. This action was based on a recommendation made by and supported by Hanshi Fleming. Shihan is the only known living first generation student of Kawaishi in Australia still practicing and teaching the art. He has dedicated more than 62 continuous years of his life to help spread the teachings and philosophy of the Kawaishi method of Jujitsu and Judo throughout Australia.
In 1999 the Jishin Academy has planned for the first ever Judo International to be staged in Western Australia. It has been appropriately named the 1999 Australian “Shihan Shihan Chek” Judo International in honour of Shihan’s achievements and life long dedicated commitment to the martial arts.

The tournament theme, is ‘building on tradition’ and it is open to junior and senior judoka from Australia and South East Asia. Further in 1999 the Jishin Academy became an associate organization of the Australian Shihan Kai to which Shihan was admitted as a life member, by Kancho Barry Bradshaw. Shihan is now clearly one of, if not, the oldest participating full time instructor in Australia.

Shihan is not only an expert martial artist, Shihan has demonstrated his ability to become the best at anything he does. As a spritely and active man in his mid-seventies, Shihan is truly a master of the martial arts and an inspiration to all sensei & students of any age and any style. Jishin is honoured to be associated with such a distinguished and accomplished man – a man for many seasons.