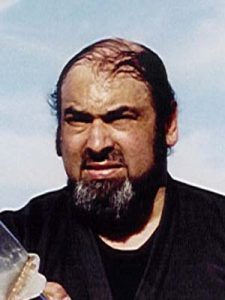 MOST OUTSTANDING KENPO INSTRUCTOR OF THE YEAR FOR AUSTRALASIA

Grand Master Gemmell was born in India but schooled in both England and New Zealand. His father, who was an ex-army officer and policeman, introduced him to martial arts. Commencing his formal studies in Kempo in 1958, under the late Sensei Michael McCashin at the Hutt Valley Kempo club in New Zealand, he was awarded the title “Most advanced student” in 1964.

Master Gemmell received his first Black Belt in 1968, after ten years of training. He then travelled to Japan and Okinawa meeting and training with Masters Magamine, Kame, and Uechi, while also studying weaponry under the famous Master Myotoshi. Following the historical path of martial arts, Master Gemmell also travelled to Taiwan and Mainland China before returning to New Zealand, where he founded his own school in Porirua, New Zealand. With the assistance of his senior students he soon established branches throughout the country, and expanded his interests in Kempo to Australia.

Over the next few years Master Gemmell also trained in the U.S.A under personal instruction of the famous Master Ed Parker, where he was awarded the title “Professor” and “Senior Master” by the International Kenpo Karate Association. He was also promoted to 6th degree black belt by the late Grand Master Ed Parker in 1979, and listed on the family tree as a first generation Kempo black belt. After being appointed sole I.K.K.A. representative for Australasia, Master Gemmell continued to expand the Kempo school, now one of the largest martial arts organisations in New Zealand, where a live in Centre with motel style accommodation was developed, thereby enabling his students to study full-time.

Upon the retirement of his master, due to ill health, Master Gemmell was bestowed the authority over the Kempo school with the title “Grand Master”. In the years from 1978 to 1984, Grand Master Gemmell was appointed executive director to the New Zealand Martial Arts Council, which was set up by the New Zealand Government for Recreation and Sports. During this period the four Tae Kwon Do groups throughout New Zealand also voted him unanimously to be the chairman for the IOC (International Olympic ComÂ­mittee). He was also instructor for the first N.Z. team policing unit, teachÂ­ing self-defence, crowd control, weaponry. Instructor to N.Z’s first DPS (Diplomatic Protection Squad). Instructed members of the first N.Z. ATS (Anti-terrorist squad). Instructor to Ministry of Transport traffic officers and short staff.

Grand Master Gemmell returned to China in 1989 and trained with the National Chinese WU SHU national director and senior coaches. He also trained at the famous Shaolin Temple (birthplace of martial arts systems), trained with Grandmaster Chen Xiao Wang in China and again later continued training at his home and chain of schools in New Zealand.

Since 1989 he has made numerous trips back to China to advance himself and study Internal Arts of Tai Chi, H’Singi, Ba-Gua Boxing, Chi-Gung and Tou-Shou. The most recent of these trips was in 1996 where Grand Master Gemmell was granted teachers qualifications for all the previously mentioned arts from Mainland China itself. Grand Master Gemmell also founded a new organisation to incorporate Chinese martial arts under one association, called “Shaolin Chuan-Fa Association”.

1996 also saw Grand Master Gemmell being featured on the front page of N.Z. Martial Arts Magazine, and in 1997 he accepted the position of adÂ­viser for Chinese martial arts section for N.Z. Martial Arts Magazine of which he has 26 articles published to date. Grand Master Gemmell curÂ­rently teaches personally and through his training manuals and videos to approximately 3000 students and 250 instructors in 60 Branches throughÂ­out the Pacific.