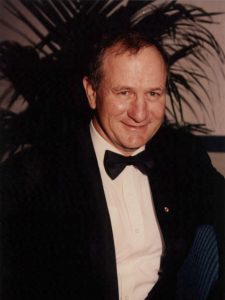 INSTRUCTOR OF THE YEAR: JUDO

Shihan Whipp was born in Hamilton, N.S.W. on 2nd March 1944 and has been involved in judo for over 37 years. Although living in six of the States of Australia, he has been a member of the executive board of five of these States.

Shihan Whipp became a serving member of the Australian Army in 1966 and spent many years involving himself with the local civilian community, creating a lot of good will towards the Australian Defence Force. He also assisted in revitalising the Singleton Police Boys Club and re-establishing judo both within Singleton and the Hunter Valley. He was elected president of the Hunter Valley Judo Association. In 1984 he won his fourth .NSW State Veterans judo Championship. His community involvement resulted in him being nominated for both the Singleton Citizen and Sportsman of the Year, which reflected credit upon both the Army and himself.

In 1985 Shihan Whipp was to be further honoured for his service to the Army, community and sport by being made a Member of the Order of Australia (AM) in the Queen’s Honours List. Again, in 1995, Shihan Whipp was awarded “The Conspicuous Service Medal (CSM) in the Queen’s Honours List, for his service to the Australian Defence Force as the commanding officer of military unarmed combat.
Shihan Whipp has been a former Australian and Oceania Champion. He was also a representative for the World Championships, and was the Australian Masters Champion for his age group. In 1992, Shihan was the manager, coach as well as player at the World Military Judo Championships held at Korea. Shihan is currently graded to 6th Dan black belt. He received this ranking from the International Judo Federation and Seibukan Association of Japan. Shihan Whipp also has a 1st Dan in Jujitsu.