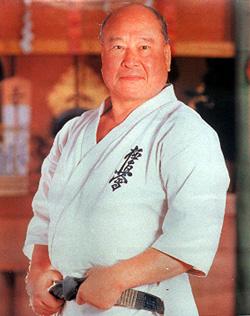 Korean born Karate-Do Master known world wide as “Mas Oyama “. He studied throughout his life with Chabi (a combination of Kempo and Jujitsu) and Shaolin Kung Fu. He was lucky to study directly under Master Gichin Funakoshi (the founder of Shotokan) and Master Neichu So (a student of Goju Master Chojun Miyagi). It was in 1951 in a town of Tateyama, Japan where he first started to teach the full meaning of true meaning of Karate to the world.

Sosai Oyama will be known and remembered by the enormous feats he performed, such as the battle with bulls. During his life time he battled a total of 52 bulls in a bare knuckle fight. Slicing the horns of 36 of them whilst only killing 3. As a result of these encounters, his name spread far and wide.

Sosai Oyama founded his first school in Japan in 1956 but it wasn’t until 1961 he changed the name to Kyokushin.

This award is a true testimonial of this dedication and to his wife Mrs Oyama.