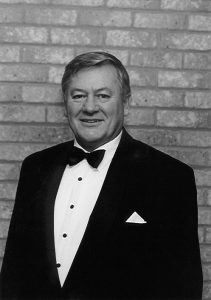 Master Lawrence was born on 9 April 1945 at Northam, Western Australia, having been raised on his father’s wheat and sheep property before joining the Royal Australian Navy in 1961. During the next few years he was involved in all sports and excelled in then winning many trophies and titles.

In February 1968 he commenced judo training at Gosport, England under the personal training of Sensei Bill Heffer. Later in 1968 he was to become a member of the Commonwealth Navy team who won the Royal Navy and Royal Marines team championships at Plymouth in England.

1969 saw Master Lawrence selected in the Scottish judo union national squad as a middle weight after being placed 5th in the Scottish National Championships. Shortly after returning to Australia in 1970 he won a gold medal in the middle weight and a silver medal in the open divisions of the New South Wales Judo Championships held at Newtown, Sydney. As a result of this he was selected into the NSW judo training squad and narrowly missed being selected to represent Australia at the 1972 Olympic Games.

He was promoted to officer rank in the RAN in 1972 with further training in England. That same year Master Lawrence received his shodan in judo through the British Judo Association. Also in 1972 he won the silver medal in the light heavy weight division of the Southern Countries of England Judo Championships and became the Royal Navy and Royal Marine light heavy weight judo champion, which he retained until 1975. He represented the British Armed Forces in the British Judo Championships and other major competitions during the period 1973-75. In 1974 he was promoted to nidan in judo and was qualified as a judo referee. He also successfully defeated the Maltese national champion and lead a Royal Navy judo team to victory over the Maltese national team in a two nation competition.

1975 saw the return of Master Lawrence to Australia for further service in the Submarine Arm of the RAN as a lieutenant. In 1977 he visited Yokosuka, Japan for his first direct introduction to the Japanese culture. In 1978 he began training with Jishukan Ryu Australia (Kempo, Jujitsu and Jojitsu) in Sydney and became the Sydney branch president later that year, holding that position until leaving for Western Australia in 1981 as part of a career transfer where he established a flourishing branch of Jishukan Ryu Australia. In 1979 Master Lawrence collated a book on the history of Bujitsu which he produced with help of the Sydney members, and donated the profits entirely to the training of Sydney black belt candidates. In 1980 he was selected to represent the Australian Armed Forces for the 1981 World Military Games to be held in Colorado, USA, however through logistical problems the team could not reach the games in time to compete.

In January 1983 Master Lawrence resigned from the RAN after 22 years service, receiving the national medal and defence forces service medal. After securing a civilian position and working his way up to offshore services supervisor with an offshore petroleum company he established a Jishukan Ryu Australia club on board the platform which operated between 1984 and 1987 and was known as the “Loneliest club in the world.” During his time there, Master Lawrence was to become a member of a three man Australian squad selected to attend three weeks of special training in Yokosuka, Japan, under the close scrutiny of Okamoto Sensei (Shihan) and Yano Sensei (Shihan). It was during this period that Master Lawrence wrote his philosophical article “Mountain of Knowledge” and commenced a more determined search for a deeper knowledge of Kobudo with the aim to understand Jishukan more fully. Master Lawrence went on to be co-founder of the West Australian Kendo Renmei with Michael Parsonage in WA in 1986, and co-founded Seitei Gata Ryu Iaido in 1990 with Jerry Yee.

In 1987 he commenced building Budokan Academy at Canning Vale, Perth, Western Australia, completing it on 4 December, and officially opening the dojo on 17 January 1988. The Budokan Academy is situated on 3.54 hectares of land, which has been landscaped with lakes and Japanese gardens to give an excellent atmosphere for studying Martial Arts, as well as serving as the home residence of the Lawrence family.

Master Lawrence returned to Japan in 1989 for special training with Okamoto and Yano Sensei’s as part of a larger Australian Jishukan squad. After training he attended the 1989 All Japan Budo Championships for senior members as a special guest of the chairman, Matsushima Sensei (7th dan Kyoshi) who had accepted a patronage to the Budokan Academy during an earlier visit to Perth. March 1991 saw a total of 14 sensei from Iaido, Naginata and Kendo arrive in Perth, sponsored by the All Japan Budo for senior members association, to conduct one of Australia’s most successful Martial Arts seminars and the most successful championships for Kendo in Australia. Grading examinations were conducted at the conclusion of the seminar and Master Lawrence was promoted to Ikkyu – Naginata, Shodan – Iaido and Nidan – Kendo.

In 1992 he again returned to Japan for two weeks and concentrated training in Iaido under the instruction of Hiraga Sensei and Matsushima Sensei. He also underwent a demanding two weeks Jishukan training under Okamoto Sensei and Yano Sensei at Yokusuka before returning to Australia.

At the 1993 AKR national kendo championships in Sydney he was elected to the 5 member Australian Kendo Board responsible for the technical running of kendo within Australia, and in March 1993 he assisted Sensei Derek Woodhouse in the starting of the WA Jodo club at Budokan Academy. 1994, Master Lawrence again returned to Japan for iaido training with other sensei, including personal training under Hiraga Sensei, passing his nidan examination at the national gradings in Tokyo after two full weeks special training. Late in 1994 he was appointed an honorary senior sensei to a British jujitsu association, now headed by Sensei Bruce Heffer, the son of his first martial arts sensei.

January 1995 he represented Western Australia in the first State Team to the Australian iaido national championships held in Canberra. Even though being his first ever involvement in an iaido competition he managed to place 3rd overall. At the 1995 AKR national kendo championships in Canberra in April he was elected chairman of the Australian kendo board, and both he and Yerry Yee were awarded their sandan in kendo at the national grading examinations.

Since 1981 Master Lawrence has been recognised by the Western Australian Parliament (both liberal and labour parties) on three occasions for his outstanding service to the community through the martial arts training of local youth and the character building such training has managed to achieve.