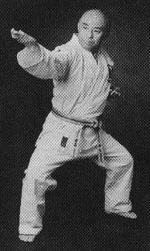 Suzuki Sensei was once quoted by another Karate Master as ” The Biggest Little Man I have ever met”. For anybody who knew Kancho Suzuki like I did, would know this to be true.

Kancho believed in the ” hard way” and led his empire of Dojo’s around the world just like the way they were run years earlier. His was very hard on his students, but he was from the old school. He changed over to Goju Ryu in 1955 when he went to Ryukyu (Okinawa) to study and live the Martial Arts way. In Okinawa, over the years he studied the Itoshu Style and Goju Style under his very good friend Kancho Miyazato Eiichi who was the Chief Instructor of Jundoukan in Okinawa. After he had mastered the Bojutsu, Saijutsu techniques and after many years away from Japan he returned to Japan in the company of his two good friends, Masters Miyazato Eiichi and Nagamine Jyoshin. On his return he built one of the largest Dojo’s ever to be privately built in Kyoto, Japan our Seibukan Hombu. He died on October 11th 1991 in Taiwan. He held ranks in Karate-Do 10th Dan, Jujitsu 9th Dan, Kendo and Iaido 8th Dan and Kung Fu 10th Dan. He was honoured by the Chinese, Korean and Japanese Government for his work towards Martial Arts.

He was also well known in Asia for being a Movie Star, in which he played the lead role on more than 43 movies. He will be sadly missed by everybody who knew him.
“Sensei, Rest In Peace”