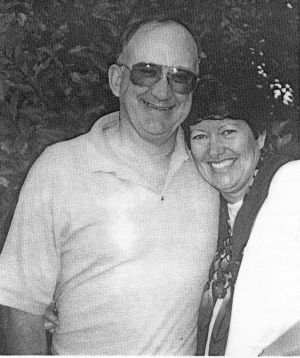 Inducted into the A.W.M.A.H.O.F. for 1996 –
MOST OUTSTANDING CONTRIBUTION OF A NON-MARTIAL ARTIST

Jon Baxter Gable was born on the 21 September, 1945 in Wellington, New Zealand. He is the oldest of two children born to Joan and George ‘Snow’ Gable. He attended school at Southwell in Hamilton, New Zealand and Wanganui Collegiate, before studying at University back in Wellington. He was a talented boy soprano in Junior school, and went onto be involved in many sporting activities including Boxing and Ballroom Dancing, but most especially, Golf, Athletics and Rugby Union. He continued on with Rugby, becoming a referee in the early 1970’s.

His travel experience began with NAC (National Air Carriers) in 1968. In 1971 NAC became Air New Zealand and he stayed on with them until 1979. During this time (1973) he met and married an Australian – Sally MacLean, and had two children, Katherine and Simon. . He then took his family to Australia and went to work for World Travel Headquarters, in Melbourne and Sydney. Upon moving up to Townsville he began working for Brandon’s Travel, then later Australian Airlines and Qantas.

He rose in the refereeing ranks to do International Games, both in New Zealand and Australia and was heavily involved as an organiser and participant in the Hong Kong Tens and Sevens, as well as the local Rugby Union scene.

He has traveled extensively throughout the world including the United States of America, the United Kingdom, Europe, Egypt and other Middle Eastern countries, the Soviet Union, S.E. Asia, Hong Kong, China and Japan.
He is a member of the Sunrise Rotary Club and is involved in many sporting and charity groups in Townsville, most notably the Women in Sport Task Group, Women’s Soccer, Townsville Rugby Union, Townsville Grammar School Rugby, the North Queensland Harness Racing Club and, of course, Martial Arts. Early in 1996 he realised his dream of opening his own travel agency proudly named Jon Gable Travel, and now lives in his own Old Queenslander home in Currajong with his wife and adult children.

A MESSAGE FROM THE PRESIDENT

Amongst other things, Jon is also a very modest person. It is not an easy task to be chosen to referee International Rugby Union. Like Martial Arts, you have to be at the top of your profession to get in this position. His involvement with the Martial Arts is something that cannot be overlooked. Without his guidance and knowledge of people, this Hall of Fame would not be as it is today.