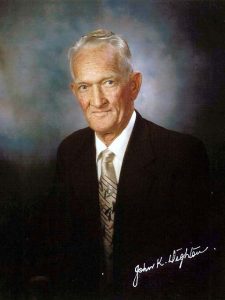 Sifu Dighton was born on 30 July 1930 and commenced his Martial Arts career in the art of Tae Kwon Do. At the same time he also studied and practised JiuÂ­Jitsu and Kung Fu. He finally changed to full-time practise of Kung Fu, and was a member of the first Martial Arts Council of North Queensland.

He has been presented with a gold medallion for lengthy service to the Police Youth Clubs as a Martial Arts instructor. 1976 to 1994 saw Sifu Dighton as the chief instructor of Manzuki Martial Arts of Australia. In 1988 he became a principal member of the Australian Martial Arts Association.

After many years as a kung fu instructor Sifu Dighton finally switched to the full-time study and teaching of tai-chi chuan and qi-gong. To this day he also studies and teaches meditation, acupressure and reflexology along with self-defence and various weapons such as nunchakus, tonfa, san-sau, double tai-chi dragon swords and the pa-kua long staff. Also in 1988 he became a principal member of the Federation of Australian Kung-Fu and Wu-Shu Organisation. In 1991 he became accredited in kung-fu with the Australian Institute of Sport, Canberra and in 1994 he became the founder and chief instructor of Au-Sem Academy of Wu-Shu (Australia).

Sifu Dighton is also a recognised author, having many works on poetry and philosophy published, and is often invited to give lectures and demonstrations to various charitable organisations. His current ranking is of 4th degree black belt kung-fu.