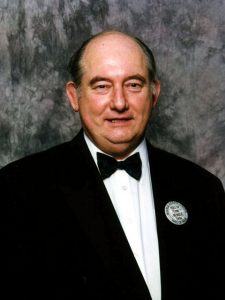 Inducted into the A.W.M.A.H.O.F. for 1996
MOST DISTINGUISHED AUSTRALIAN MARTIAL ARTIST OF THE YEAR

Kancho Bradshaw was born on 10 February 1939. By 1946 he began his first formal lesson in chinese boxing (Kung Fu) at the Young Chinese League, North Melbourne and at the Chinese Church of Christ, Carlton, Victoria. In 1950 his first formal lessons began in Jiu-Jitsu under Aurbery Bailey at VRI, Flinder Street Station, Melbourne, and by 1955 he received his first judo grading under Wally Strauss. By 1957 he had graduated to instructor level under Wally Strauss’s personal supervision with his own class at Bluff Road, Hampton, Victoria as well as continuing formal lessons with Professor Strauss three times per week. Such personal tuition continued under Professor Strauss where he went on to gain positions of authority within the organisation. 1960 he was appointed assistant Hon instructor for Stennings Schools, Jiu-Jitsu and judo classes. In 1966 he began work with the Melbourne City Council and was appointed chief coach for Martial Arts where he established schools at five of the community centres in the greater Melbourne area, raising and appointing black belts as instructors.

Between 1967 and 1968 Kancho Bradshaw had established YMCA judo schools in the north eastern region of Melbourne, again raising black belt instructors for these areas. In 1968 he joined the Chinese Youth Society of Melbourne at teacher level, and in 1968 he was officially appointed director of caretakers Hon board of directors of Jiu-Jitsu, Judo and Karate Instructors Association of Australia. 1970 saw the establishment of schools in rural areas around Victoria, specifically Wallan, Kilmore, Cranbourne and Lilydale.

1975 began with initial contacts being made with Professor Wally Jay whereby Professor Strauss and Shihan Bradshaw discussed the implications of the small circle theory; contact was then re-established in 1984 with Professor Jay. In 1977 he was appointed regional organiser north of the Yarra in charge of supervision and overseeing all privileges of grading and/or grading recommendations for members of the association, and in 1979 he founded and established the Australian Jiu-Jitsu, Judo and Chinese Boxing Federation of Instructors to incorporate his Martial Arts experience in these three major disciplines into a total self defence system.

Kancho Bradshaw ceased affiliation with the Jiu-Jitsu, Judo and Karate Instructors Association of Australia and Professor Wally Strauss in 1981 due to personal and professional differences of opinion in relation to karate and kung fu, in order to consolidate the chinese boxing chapter of the Australian Federation of Instructors, and in 1989 he became an affiliated member with the World Jujitsu Federation and Australian representative, Professor Jan de Jong. He also became an affiliated member with jujitsu America in 1990, following attending seminars run by Professor Wally Jay held in Melbourne in 1986. 1990 saw him re-establishing ties and affiliation with Ron Forrester and the Canadian Jiu-Jitsu Association that were initiated but not cemented during tenure with Professor Strauss. In 1992 Kancho Bradshaw initiated contacts with Professor Don Jacob with the intention of having him run a number of seminars in Australia for his organisation. At the same time contact was established with Relson Gracie.

Kancho Bradshaw formed the Australian Shihan Kai as the international body of the Australian Federation of Instructors in 1994. Liberally translated, the name of A.S.K. means the “Meeting of Australian Master Teachers” and is meant to embrace all martial arts of all styles. 1994 saw him sponsoring Professor Rick Clark to Australia to run a number of workshops and seminars for ASK on Kyusho Jitsu vital point techniques in Melbourne, Sydney and Canberra. Professor Clark again returned in 1995. He also affiliated with American Teachers Association of the Martial Arts and its international body, and in 1995 became the co-founder of the Australian and American Alliance with ATAMA and ASK. That same year he hosted the first sanctioned Australian and USA Alliance Martial Arts seminar to be held in Australia under the banner of the International Teachers Association of Martial Arts, and the first internationally recognised seminar for ITAMA outside the USA.

Kancho Bradshaw has received an outstanding lifetime achievement award of the International Teachers Association of Martial Arts for his nearly 50 years of excellence in several Martial Arts while embodying the pursuit of the “Perfection of the human character”. In accepting the award the honour not only recognised his own achievements but the continuing contribution of Australian Martial Arts, and the knowledge and skills that Australian Martial Artists can contribute to the wider martial arts community. Kancho Bradshaw has also been nominated for the World Martial Arts Hall of Fame, but was unable to attend on that occasion.

Kancho Bradshaw is currently the executive director and principal instructor of the Australian Jiu-Jitsu, Judo and Chinese Boxing Federation of Instructors, as well as tournament director and chief lecturer for functions and competitions held within the Australian Federation of Instructors. He is also a State government licensed instructor in each of the three disciplines of Jiu-Jitsu, Judo and Chinese Boxing to teach each of these Martial Arts anywhere in Victoria. He is currently graded as Kudan, 9th degree senior professor and black belt instructor in Judo, JiuÂ­Jitsu/Taijitsu Ryu and Kung Fu; 6th dan Iaido and master teacher level in chinese boxing (kung fu).