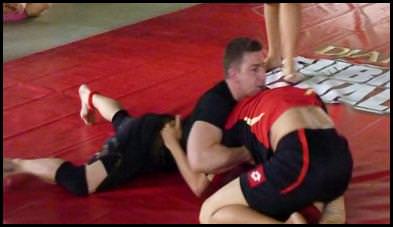 On Oct 2, 2010 the Combined Martial Arts Academy (CMAA) was represented at the Surabaya Submission Grappling Challenge. CMAA and Synergy Jujitsu member Casey Suire attended the event, his second grappling tournament. Weighing in at a solid 70Kg I felt pretty good going into it said Casey, who had previously managed a 3rd in his class and 2nd in the Absolute Division in his first tournament in Solo. Casey was fairly confident that he could compete well in Surabaya.

The opponent who had beaten Casey in the Absolute Division in his earlier event had lost weight and was now in his weight class. Casey mentioned that had him a little nervous until he found out his opponent was on the other side of the bracket. There were 16 competitors in the 66kg-76kg weight class, so 3 wins would get Casey to the finals which was his aim. Casey defeated his first opponent in less than 3 minutes forcing a non-submission tap, with Casey in side control. Casey said his opponent couldn’t breathe during the bout. Although his opponent lacked fitness, it was a good confidence builder for Casey. 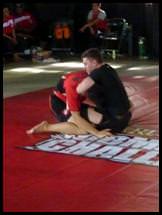 Casey’s second opponent was defeated in less than 1 minute with Casey executing a sprawl and employing a choke, “Niko Han” style, with one hand on his chin, belly on his head, and with one arm supporting. The grip was tight; with Casey ensuring no way was his opponent getting out of that technique. Luckily for Casey most of the other matches were going into sudden death and were approximately 10 minutes or more. Casey knew finishing quick was the best way to keep fresh. For his third opponent, he used a trip takedown on him, his opponent “Turtled” and Casey took his time to get his back, with a little less than 3 minutes to sink in a rear naked choke. Not wanting to rush it, Casey let his opponent tire then finished the match. Unfortunately, the organizers wanted all the finals to take place after lunch. In actuality after the 3rd place matches too, so it was nearly 2 hours before Casey went in for the final. This meant cooling off and needing a good stretch before resuming the finals.

Casey’s opponent for the finals, Eko had finished off, his opponent who had beaten Casey in his first tournament in Solo with a nasty heal hook, so Casey was ready to keep his legs away from Eko. Again, similar to Casey’s second match Casey’s opponent Eko tried to take him down; However, countering with a sprawl and trying his signature choke as a counter both competitors fought hard. Seeing his opponent gurgling Casey made a decisive mistake.

“I had one arm trapped in, and I wanted to get around it to finish the choke fast. In hindsight I should have been more patient, but victory was so close. When I moved my arm, he slipped out of the choke and we scrambled. I got up and he stayed down, guess he didn’t appreciate my sprawl on his head. I made some crazy attempts to get around his legs which I did and got into side control”.

This went on for a few minutes with Casey eventually controlling Eko, switching from side to side and even knee on belly.

“Somehow I got my outside leg trapped underneath me in an odd angle with Eko holding my toes. I was pulling hard on my leg to get it and sprawl and then all of a sudden we heard a loud POP”. 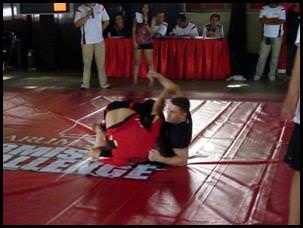 Casey knew something popped on his body, but the expression on Eko’s face was that of concern as well. It was a loud enough pop that everyone around the mat in the gym heard it. At that point the match was stopped; the medics laid Casey down and checked him out. They believed that he had dislocated his knee.

Unfortunately for Casey that is how it ended and he lost in the final receiving a Silver for his efforts in his division. As a result of his injury Casey did not join the Absolute class, although he felt he could have done well; better to be safe and fight another day.

“Overall, I feel I am improving each time I go out there, especially considering many of the guys I am competing against have 2-3 years training jujitsu and I started regular classes in March 2010 learning this stuff, and you will realize I’m a sponge catching up quickly. My knee/hamstring injury sustained is being rehabbed and healing nicely, so I should be back to 100% when I fight on October 30th in a rematch from my last MMA fight in December. I’m gonna do my best to make sure he doesn’t want another rematch after this one.”

Casey has mixed feelings about his result being proud & disappointed at the outcome, but that’s what drives him to get better and continue to learn. Casey is a competitor to watch in this sport within Indonesia who a lot of people can see will only get better with time. As he has said himself:

Since the event Casey has been going to physical therapy daily and now the Physiotherapists seem to think it’s a strained hamstring, not his knee. Casey is now preparing for an MMA fight at the CMAA Dojo originally scheduled for 16 October but after his injury now rescheduled for 30 October.